Economists warn GDP will fall again because of Level 5 restrictions 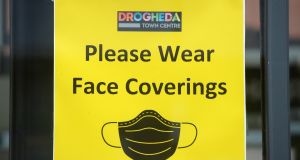 The Irish economy is likely to contract by around 1.3% in the fourth quarter, according to Davy stockbrokers economist Conall Mac Coille

Economists have warned that GDP is now likely to fall again in the final quarter of the year and the unemployment rate will head back over 20 per cent due to the imposition of Level 5 restrictions .

There are also fears that ongoing waves of heavy restrictions in 2021 could further damage recovery following Government statements on Monday night indicating that these might be necessary.

The Department of Finance has now updated its GDP forecast for this year to show a 3.5 per cent annual decline, compared to a 2.5 per cent figure on budget day.

The Irish economy is now likely to contract by around 1.3 per cent in the fourth quarter, according to Davy stockbrokers economist Conall Mac Coille. This followed quarterly GDP declines of 2.1 per cent in the first quarter of the year and 6.1 per cent in the second quarter, with indicators pointing to a recovery in the figures in the third quarter.

Goodbody stockbrokers chief economist Dermot O’Leary estimated that the headline unemployment rate – including PUP claimants – now down under 16 per cent would rise again to over 20 per cent as large-scale layoffs became inevitable.

The Government has estimated that 150,000 people could go on to the PUP from sectors such as retail, leisure and hospitality.

Minister for Finance Paschal Donohoe has said he now expects the budget deficit this year to be €23 billion, compared to the €21.5 billion figure estimated on budget day due to additional costs from supporting firms and people laid off through the latest restrictions.

Business spokespeople underlined the risks to businesses now not only from the shutdown due to start this week but also from further shutdowns in 2021.

Sources say the Government strategy now is to reduce the reproduction number– the so called R0 – to 0.5 and to impose restrictions again if it rises above 1.3. This opens the prospect of a series of openings and closures as virus numbers ebb and flow .

Danny McCoy, Ibec chief executive, told RTÉ on Tuesday that the potential is there in the outlined Government strategy for restrictions being reimposed in 2021, with potentially serious implications for many businesses.

Already the latest restrictions combined with what has gone before means “devastation for a significant number of sectors”, he said.

Chambers Ireland chief executive Ian Talbot said the Government needed to show how successive waves of opening and closing the economy could be avoided.

“The worst-case scenario for the economy would be to enter a series of sawtooth lockdowns and reopenings due to the significant costs associated with reopening and restocking businesses.

“With limited capital reserves, and no appetite for new debt under such uncertainty, many businesses may not be able to reopen after this new round of closures.”

Dermot O’Leary of Goodbody said that the living with Covid plan in September was meant to show how society and the economy could operate in conjunction with the virus.“Health officials and the Government have decided that the health risks are sufficiently high to justify this draconian action. It will come with a heavy toll.”