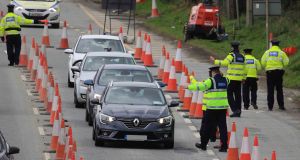 “Why will a shorter lockdown not just be a mini, even less worthwhile, version of the first time we tried it?” Photograph: Eamonn Farrell/RollingNews.ie

It is often asserted that there is no real trade-off between dealing with Covid-19 and the economy. Equally often, it seems to me at least, it is claimed that such a trade-off does exist. Is there any way of coming to an evidence-based decision about which belief is correct?

The question has to be framed in this manner because of the obvious ways in which evidence-free ideology has become a second source of infection.

If we don’t suppress or eliminate the virus, we risk overwhelming the health service and people will voluntarily lock down in a chaotic and prolonged way: the economic damage of all that will be equal or greater than legislated restrictions or lockdowns. That, in a somewhat simplified form, seems to be the argument.

The counter set of propositions mostly amount to arguing that proper accounting of the costs of lockdown mean that they are too expensive. That involves adding up the GDP losses, the costs of non-Covid heath problems and the myriad sociopolitical costs. Good luck with trying to put numbers on all of this.

What if, for instance, Boris Johnson’s answers to the coronavirus question tips the balance in favour of Scotland gaining its independence and the UK comes to an end? How do we factor in this sort of thing? Different people will have different views over which side of the ledger this belongs.

So, in some respects, the question is impossible to answer. But answer it we must, even if we acknowledge that our conclusions may be wrong.

We might choose to answer a different, slightly less intractable question: if we take it as given that we have to do something, which is the better choice, national lockdown or locally targeted measures?

Economists steeped in mathematical modelling have been taking a deep interest in the methods deployed by epidemiologists. Their conclusions have not been uncritical.

In a recent paper, professors Eichenbaum, Rabello and Trabant conclude: “Standard epidemiology models abstract from the way in which people’s economic behaviour changes in response to policies aimed at curbing infections.”

They go to say that many of those standard models are vulnerable to the weaknesses displayed by large economic models that were common 40 years ago. Something called the Lucas critique (for which the author won a Nobel prize) was an extinction-level event for a generation of economic models and modellers.

This is not just an ivory-tower debate with little or no relevance for the real world. Our lives are being determined by political decisions guided, we are told, by the scientists, mostly epidemiologists.

Another economist, Paul Romer (another Nobel prizewinner) has taken aim at epidemiologists and scientists who “bless an endless cycle of lockdown and reopening” and “dismiss policies with benefits that exceed costs by orders of magnitude”. His criticism is trenchant: “It is all too easy for people with knowledge of such disciplines as virology and epidemiology to overreach when they opine on policies for managing the pandemic . . . scientists [who espouse such views] are observationally equivalent to madmen and fools.”

Strong stuff. But how is the policymaker to choose between which expert to listen to?

I don’t quote Romer because I necessarily agree with his criticisms, interesting though they are from such an authoritative source. It’s more because his conclusions line up – triangulate if you like – with the recommendations of other economists such as the ones cited above and some leading health experts, ones such as Prof Anthony Costello, an ex-director at the World Health Organisation. From disparate sources we get to one conclusion, an answer of sorts.

The only thing that stands any chance of producing a good outcome, where the benefits do outweigh the costs, is to both suppress the virus and, most critically, implement an effective test, trace and isolate regime.

I don’t want to put words in anyone’s mouth so I will merely state my own conclusion from all this: without proper test, trace and isolate, all we get is chaos and a devastated economy. Quite possibly, all other policies are worse than useless. The “zero-Covid” versus “suppression” debate is a distraction: both demand functioning test, trace and isolate.

I observe that the test, trace and isolate question is answered in the same way by all experts: who disagrees that we don’t need one? The mystery is then why, in so many jurisdictions, did we waste the summer virus lull in not building something that worked?

All of this amounts to a hard, often brutal, calculus. The Economist newspaper didn’t pull any punches with its answers: “in choosing to act, deaths are more important than cases”.

In the UK, for all of the daily reporting of ever higher cases, deaths are running at 8 per cent of April’s levels. National lockdowns produce chaos and aren’t worth it. Local measures accompanied by functioning test, trace and isolate are the only measures that stand a real chance of success.

Proponents of circuit breakers need to be asked why they think this time will be different. Will proper test, trace and isolate regimes be put in place? Why will a shorter lockdown not just be a mini, even less worthwhile, version of the first time we tried it?

Different experts come to the same conclusion from differing perspectives. Even the WHO is sounding cautious about the net benefits of national lockdowns.