Mortgage drawdowns fall by almost a third compared to 2019 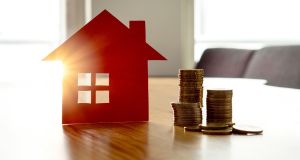 Only 172 borrowers took out mortgages to buy properties to rent out, a fall of almost half on the same period in 2019. Photograph: iStock

Fewer than 6,400 people took out mortgages to buy homes in the three months to the end of September as Covid-19 took its toll on the property market.

Official figures published on Tuesday show that the value of mortgages drawn down in the third quarter of the year tumbled by 27 per cent to €1.96 billion from €2.64 billion during the same period in 2019.

Banking and Payments Federation of Ireland statistics show the total number of home loans drawn down during the three-month period was 8,220, a fall of 30.3 per cent on the 11,794 mortgages taken out through the third quarter of last year.

The number of borrowers taking out mortgages to buy homes fell 32.6 per cent to 6,396 in the third quarter, according to a report from the federation, which represents banks and the financial services technology industry.

Remortgages, where homeowners switch lenders, fell 11.3 per cent in the three months to the end of September to 1,266.

Only 172 borrowers took out mortgages to buy properties to rent out, a fall of almost half on the same period in 2019, while 556 people topped up their home loans, 36.6 per cent fewer than in the third quarter of last year.

Federation chief executive Brian Hayes described the three-month period as a “difficult one” for drawdowns.

“It should be noted, however, that the year-on-year decline is less than the decline we saw in the second quarter of this year,” he said.

Mr Hayes pointed out that figures showing an increase in the number of people whose banks have approved them for mortgages gave some grounds for optimism that the situation would improve in the months ahead.

“It remains to be seen, however, what impact the latest Covid-19 public health measures with restricted economic activity is likely to have on prospective home buyers and the mortgage market,” he said.

The federation releases its figures as the Republic nears the end of the first week of a Level 5 lockdown.

International credit ratings agency Standard & Poors predicted days ago that house prices in the Republic could fall 1.6 per cent this year and 1.1 per cent in 2021.

Banks approved a total of 4,621 new mortgages in September, almost 21 per cent more than during the same month in 2019 and 19.3 per cent ahead of August.

The total value of home loans that got the green light from the banks was €1.12 billion, close to 35 per cent more than the amount approved in September 2019 and 18.5 per cent up on August of this year.

First-time buyers accounted for 2,636 of the mortgages approved in September and €647 million of the total that lenders agreed to hand out.

Some 1,191 buyers planning to move from their current homes got approved for loans worth a total of €326 million.

Mr Hayes said the figures showed a significant increase in mortgage approvals during September, with the number of loans up more than a fifth and their value more than one-third ahead of the same month in 2019.

“The increase reflects the relaxation of the Covid-19 restrictions during the summer months but also demonstrates an encouraging level of resilience in the market,” Mr Hayes added.