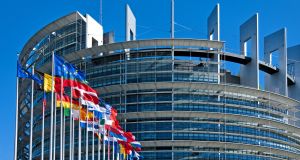 A €750bn stimulus to counteract the economic damage of the coronavirus pandemic and the EU’s next budget were broadly agreed between member states in July but both need MEP approval. Photograph: iStock

The European Parliament has demanded more money for research, health and to tackle climate change and for strict conditions that funds should be withheld from countries that breach democratic norms in a standoff that could delay the EU’s landmark recovery package.

A €750 billion stimulus to counteract the economic damage of the coronavirus pandemic and the EU’s next budget were broadly agreed between member states in July.

But both need the approval of MEPs to be finalised, and lawmakers have pushed for more money in the budget for key EU programmes, including for infrastructure, defence and student exchanges, after they were bargained down by member states seeking a slimmer budget during negotiations this summer.

This week lawmakers broke off talks with EU government representatives after calling a compromise proposal insufficient.

“We can’t accept your little, little proposition,” said Pierre Larrouturou, an MEP who is a rapporteur on the budget for the left-wing Progressive Alliance of Socialists and Democrats.

All sides believe that an agreement must be reached this month so the European Commission can begin borrowing and be ready in January to start issuing the funds, which in some cases are sorely needed.

Along with MEPs, a group of member states have called for strict conditions that would withhold recovery funds from national governments that do not respect the rule of law – a move that is aimed at Poland and Hungary, where national governments are accused of interfering with judicial independence and curtailing freedoms.

The package requires the sign-off of national parliaments, and countries including the Netherlands have warned that their lawmakers may not pass it if it does not contain sufficient guarantees.

Equally, Poland and Hungary have threatened to block the deal if they deem its rule-of-law provisions too strong.

Mr Larrouturou called for the revival of a 2011 plan for a common EU tax on financial transactions that was blocked by Britain when it was a member of the bloc, arguing that the levy would bring in the additional resources required to reach goals such as transition to climate neutrality.

Talks between the parliament and national governments are due to restart on Wednesday, which may put the row over the budget firmly on the agenda when EU national leaders meet the following day.

A senior diplomat called the suspension of talks with parliament surprising and an attempt to create “drama”.

“I find this regrettable because we have made substantial steps towards the parliament position,” the diplomat said. “We cannot afford the luxury not to talk to each other ... Every delay puts at stake the wellbeing of hundreds of millions of Europeans.”