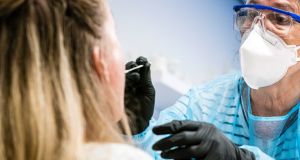 Dutch researchers believe the virus’s impact on the brain may be the reason why patients often lose their sense of smell or taste. Photograph: EPA/Rob Engelaar

Dutch medics tracking the ways Covid-19 attacks the human body have found the first evidence that, as feared, it does affect the brain – which may be why patients often lose their sense of smell and sometimes have problems concentrating after the virus.

Published in the Lancet medical journal, the research by a team at Amsterdam’s university medical centre reveals that when coronavirus attacks the immune system, the system fights back so vigorously that it affects all the internal organs to some extent – but particularly the brain.

The analysis is based on postmortems carried out between March 9th and May 18th on the bodies of 21 clinically-confirmed Covid-19 patients, and shows that when the immune system itself is damaged it goes into overdrive and attacks proteins in the brain that it believes are responsible.

So although the researchers did not find any traces of the potentially lethal virus in the brains they examined, they did establish the link between the malfunctioning immune system and damage to the brain that had left “clear marks”.

“These immune cells are normally kept out of the brain, but in the Covid-19 patients they’d entered it from the bloodstream and that was very wrong. From there we were able to show that these cells, created by the body specifically to track down the Covid-19, had mistakenly attacked proteins in the brain that resembled the virus. In effect, the immune system runs wild.”

The team believes this impact on the brain may be the reason patients often lose their sense of smell or taste, and sometimes suffer from fatigue or loss or concentration quite some time after they appear to be cured.

They say the findings indicate that patients should be treated with drugs that suppress the immune response to the virus. The next step in their research will be to establish which proteins in the brain are attacked and why.

As a second wave of Covid-19 sweeps the Netherlands, the European Commission delivered a new consignment of the anti-viral drug remdesivir for Dutch hospitals on Thursday after a warning by the health ministry earlier this week that stocks – which the EU manages – had run out.

The country’s public health institute forecast a week ago that Covid-19 cases would increase this week to about 5,000 a day, but by Wednesday evening the level already stood at 5,831 for that 24-hour period.

A total of 1,070 patients are hospitalised, of whom 228 are in intensive care, and Germany is on standby to take Dutch cases if necessary.