Covid-19: HSE chief says a record number of over 19,500 tests done on Thursday 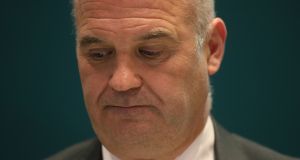 The Department of Health on Friday night reported five additional deaths related to Covid-19 and 617 confirmed further cases of the disease, including 123 in Dublin and 107 in Cork.

This brings the number of deaths from the disease in the State to 1,821 with a total of 40,703 of cases since the start of the pandemic.

The 617 cases reported on Friday is, by a slight margin, the highest daily number since late April.

Chief medical officer Dr Tony Holohan said the profile of the disease continued to deteriorate. “We are continuing to see a high number of daily cases. It is vital that we interrupt the transmission of the virus now.”

There have been an additional 32 hospitalisations and eight ICU admissions in the past 24 hours, he pointed out.

“Nphet [the National Public Health Emergency Team] continues to monitor the situation however it is early, individual action that is needed to suppress the virus. Please follow public health advice and do your part to make an impact on the disease.”

Earlier on Friday, the chair of Nphet’s Epidemiological Modelling Advisory Group said there has been “exponential growth” of Covid-19 infection in Ireland along with “rapid increases” in the number of people being admitted to hospital and ICU.

Prof Philip Nolan said as of Thursday afternoon there were 172 people in hospital, with 22 of those admissions in the previous 24 hours, with 27 people in ICU.

He said at the worst of the pandemic there were 60-80 admissions to hospital and 10-15 admissions to ICU per day over a period of four weeks.

“We are nearly a quarter of the way to those admission rates. We must change course now,” he said on Twitter. “The number of people in hospital is now growing exponentially.”

The number of people in hospital is now growing exponentially. We did this simple exponential fit to the hospital data last Friday 1 October; while we expected it, it still worries me that the numbers are tracking this exponential curve. 6/7 pic.twitter.com/pIlbs7yz9T

He said the exponential growth of Covid-19 infection should “make each and every one of us stop, think and resolve again to do our part to suppress the virus, now and quickly”.

“The call to action is the same as it has been for weeks, but much more urgent now: radically limit our discretionary social contacts, maintain physical distance and safe practices when we do meet, self-isolate and call for help with any symptoms of Covid-19,” he added.

On Thursday, a further 506 cases of Covid-19 and one death from the virus were confirmed in the State.

Lifford/Stranorlar in Co Donegal remains the national “hotspot” for Covid-19, with a 14-day incidence of 602.6 cases per 100,000 people, according to the figures.

This is more than five times the national average of 116.4, figures published on the Government’s data hub show.

The director general of the Health Service Executive (HSE) Paul Reid said on Friday that 19,500 Covid-19 tests were carried out on Thursday – a new daily record.

Mr Reid said that the numbers in the past week had been shocking. “That’s the volume we’re at, that’s the trend,” he told Newstalk Breakfast.

The public needed to take a look at those figures and to act appropriately.

“If anybody’s looking at the trends and the numbers coming through right now, it’s quite serious.

“That’s the volume we’re at, the trend we’re seeing and that’s the concern – people need to now take a radical look at everything we’re doing. I really mean it.”

Mr Reid urged the public not to meet people they did not need to meet and to avoid having others visit their homes over the next few weeks.

No matter that the Government or Nphet did, the biggest impact on figures would be public behaviour -– “what people do”.

“We’re all on the same page that our hospital service is challenged, and we’re watching it very closely on a daily basis – and want to keep all of the other services going.”

There wasn’t any disagreement between the health service and Nphet, he said. They were all equally concerned about the impact of a full lockdown.

There are currently around 41 ICU fully manned beds available in the health care system, while there was capacity to scale up if needed, but that would mean stopping some other health services, he said.

“We don’t want to get near to those levels.”

The Chief Clinical Officer with the HSE Colm Henry warned that there is “the tiniest of windows to stop the virus growing”.

Dr Henry told RTÉ Radio 1’s Morning Ireland that there was funding for ICU beds, but that it was a system that needed trained experts. The baseline for the number of beds was 256, he said. Funding needed to be secured to reach the target of 450 by the end of 2022.

Hospitals every winter were accustomed to dealing with surges, it was likely that the health service would experience individual pressure points rather than being overwhelmed, he said.

But Dr Henry warned that the situation now was more difficult as back in March and April during the first surge hospitals had “cleared the decks” and now they were providing other services.

Covid-19 levels in Northern Ireland were also a worry he said. They were “alarmingly high” and the capacity to control border areas was important.

“We need an all-island plan,” he said.