Chris Johns: Return of the expert – at least on this side of the Atlantic

From dealing with Covid-19 to formulation of a blockbuster budget, the boffins are back 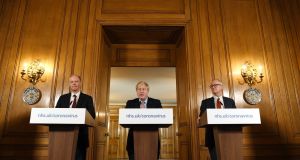 Having given up on experts, UK politicians cannot now open their mouths without uttering the stock phrase, “we are guided by the science and medical advice”.

From dealing with Covid-19 to formulation of a blockbuster budget, the boffins are back. But some of the UK’s experts are providing different advice compared with their counterparts in Ireland and elsewhere. Britain’s relationship with evidenced-based policy is as volatile as the stock market. Experts were recently mocked and vilified by ministers; today, official policy is driven by scientists who have determined that “about 40 million people in the UK could need to catch the coronavirus to build up herd immunity”.

When told about Ireland’s new package of measures, revealing a different response to the virus, a Downing Street source was quoted as saying, “they have their scientists, we have ours”. We should assume that the experts advising British prime minister Boris Johnson are sincere and their advice is based solely on the evidence and the models.

Which raises an obvious question: why are experts in other countries reaching such very different conclusions? It’s impossible for non-experts to tell, not least because we lack detailed knowledge of the modelling.

Economists know something about mathematical modelling, its strengths and weaknesses: choosing between models is as much art as science. Models can be useful; they can be very misleading. It seems likely that experts in different countries are not using the same models. It’s tempting to say that one of them will be correct, but even that could be wrong. There is no guarantee that any one model represents the truth.

One expert who stumbled badly this week was new European Central Bank boss Christine Lagarde. Her comments about European bond markets were ill-advised and extremely damaging (“nothing to do with me”). It couldn’t have been worse. If things get really bad, Ms Lagarde and other central bankers will have to consider “helicopter money”, the writing of cheques to each and every one of us.

That, of course, is just another expert recommendation. But something like it looks very necessary to this columnist. Her badly advised remarks do not suggest a willingness to embrace radical but necessary action. Medics worry about future waves of the virus. Economists worry about a re-emergence of the euro zone crisis.

Irish, UK and EU reliance on expert opinion, flawed or otherwise, provides a contrast with the US that couldn’t be greater. US president Donald Trump’s gut instincts drive policy in, by now, familiar ways.

Trump’s popularity ratings are unchanged. His supporters seem to think that coronavirus is a foreign plot, aided and abetted by the Democratic Party, to unseat the president. Historians debate the causes of the fall of past civilisations. There will be less room for doubt this time around.

Whatever it takes to win

Freshly minted UK chancellor of the exchequer Rishi Sunak clearly enjoyed his first budget speech. Initially nervous, he grew in stature as he spent the sums of money that the opposition has been demanding for the past decade. The Conservative party revealed its advantage over all others: ideology comes second to the need to acquire and hold on to power. Tories flirt with ideas, occasionally and briefly, but will always do whatever it takes to win. It’s a single-mindedness that can only be admired. Experts were an inconvenience, a nuisance, during Brexit (itself likely to be another coronavirus casualty) but are handy now. We have been saying for 10 years that low interest rates mean governments can safely borrow more. Sunak has found it convenient, finally, to listen.

Most economists also say that austerity wasn’t necessary in the first place. It’s responsible for the disappearance of much public infrastructure that would have been handy during the current crisis. Like respirators and the people who know how to operate them. Like doctors, nurses and beds.

Stock market falls can only be rationalised if the temporary presence of the virus has permanent consequences. The epicentre of the last crisis was the sub-prime mortgage. The next one could be corporate debt. Consumer behaviour may be changed forever. The threat to viable businesses from a sudden stop in economic activity is obvious. The assistance that is on offer to vulnerable individuals and SME’s is economically sensible and politically astute. But more will be needed, probably much more. A global recession is likely: the best economic experts cannot be more precise than that. The depth and duration of that recession will depend in part on the policy response. It needs to be both radical and large.

If another bailout is coming it must, this time, be for anybody but the banks. But with financial markets coming under serious stress, banks need support. Some people think liquidity provision – lending of extra cash by central banks to high-street banks – amounts to another bailout. That’s wrong: loans are not gifts.

There are worries about the functioning of markets. That’s why banks need that liquidity. On one level that is not particularly worrying, things will sooner or later return to normal of their own accord. The question being asked is whether or not our definition of normal now needs to be changed. And if so, in what way? Expert answers only please.

Seroba eyes Irish start-ups as it reap rewards from investments

1 Majority of employees don’t want to return to pre-Covid working patterns
2 The $6bn judgment pitting Nigeria against Irish businessmen
3 Homeworking is depriving me of juicy gossip
4 If tourists are such pariahs should we not be testing them on arrival?
5 State to auction €750m worth of Irish treasury bills
6 Investors in Irish solar energy fund in line for €20m payout
7 ‘My rent here is so low it’s a joke’
8 Primark rejects £30m bonus for bringing back staff
9 Tobacco giant’s menthol-ban substitutes take 5% share of Irish market
10 Alibaba co-founder Jack Ma sells $8.2bn worth of shares
Real news has value SUBSCRIBE