North will continue to diverge from Republic on tackling Covid-19 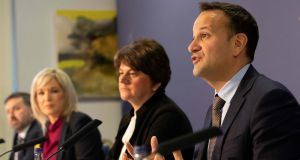 At the North-South ministerial meeting Taoiseach Leo Varadkar emphasised the need to ‘limit the harm to human health and human life’ from the virus. Photograph: PA

Northern Ireland for the moment will continue to diverge from the Republic on how to address the coronavirus emergency, it became clear after Ministers from the North and South met in Armagh on Saturday.

While Taoiseach Leo Varadkar, who also attended the meeting, said coronavirus “did not recognise borders” DUP First Minister Arlene Foster and Sinn Féin Deputy First Minister Michelle O’Neill held to opposing views on whether schools, universities and childcare facilities should be closed in Northern Ireland, as happened in the South.

Mr Varadkar said it was inevitable there would be differences in approach to tackling the crisis North and South. “But the differences that exist are mostly around timing,” he added. “What there isn’t any difference about is our common objective, which is to slow down this virus in its tracks and push it back as much as possible and limit the harm to human health and human life.”

On Saturday evening the North’s Department of Health reported five new positive tests for coronavirus bringing the number in Northern Ireland to 34.

And as the response in the North appeared to be breaking down politically along Orange and Green lines Ms Foster spoke about taking a “phased and proportionate” response to Covid-19.

In the North Sinn Féin and the SDLP have called for school closures, as has Catholic primate Archbishop Eamon Martin, while the DUP and the Ulster Unionist Party argue it is not yet the time for such action.

After the meeting of North-South Ministers in Armagh Ms Foster said she would continue to take the advice of the North’s chief medical officer Dr Michael McBride, who unlike his counterpart in the South, Dr Tony Holohan, has counselled against the immediate closure of schools and colleges.

Ms Foster also referred to how the British chief scientific officer said that politicians “must take the right decision at the right time to ensure that we have the right impact”. She added that “calm and mature leadership” was required at this “challenging time”.

She made clear however that in due course, without mentioning a date, that schools and colleges would close. “We will be taking that action when it is the right thing to do in terms of what is happening in Northern Ireland,” she said, while adding that there was “great co-operation” between the North and South.

“There isn’t a difference. It is about the timing of when the interventions take place,” she said.

Ms Foster indicated when it did happen schools would be closed through to September at least. “At some stage in the future, when we are advised on the medical evidence, they will have to close the schools,” she added.

“Children will be at home for quite a considerable period of time, given that when we do close the schools they will be closed for at least 16 weeks. Then of course you are into the summer period, so they will be off school for a very long time.”

Ms O’Neill, however, called for immediate action in line with the South. “All parties accept the fact that schools will close, it is a matter of when. In my opinion the schools should close now. I think we need to be consistent across this island,” she said.

“Disease knows no border. We have to work on all-island collective basis in what is an emerging crisis, in what is a rapidly changing situation,” added Ms O’Neill.

On Thursday Ms O’Neill seemed happy to acquiesce with the general British government decision to keep schools and colleges open, saying that Ministers were being guided by the science, although, she added, it was a decision that would be kept under review.

On Friday however Ms O’Neill said schools and universities should close in line with measures announced in the Republic of Ireland on Thursday.

Asked why she changed her mind overnight, Ms O’Neill replied that in making her statement on Thursday she stressed the need to keep the matter under review. “Things changed . . . overnight,” she said.

Ms O’Neill added that the Northern Executive would meet on Monday to consider its continuing response to coronavirus.

On Thursday Ms Foster said it was “disappointing” that Mr Varadkar had not notified the Executive in advance of his statement about closing schools and taking other actions to address Covid-19.

Mr Varadkar, indicating that no such slight was intended, said the Government had a plan in place but had to bring it forward “almost overnight” by making the announcement in Washington. He had concerns that word of the plan might emerge through social media if he had not made his Washington statement.

“We gave as many people a heads-up as we could, including authorities here in Northern Ireland,” he said.

All the politicians present gave assurance of great co-operation between Dublin and Belfast.