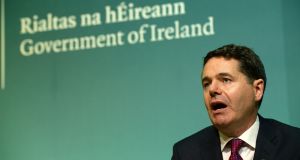 The budget delivered by Minister for Finance Paschal Donohoe on Tuesday prioritised extra public spending over tax cuts by a ratio of two to one. Photograph: Dara Mac Dónaill

In framing his first budget Minister for Finance Paschal Donohoe faced a difficult balancing act on both the political and economic fronts. A slip-up on either one could have led to a premature end for this Government.

On the political front the Minister appears to have pulled it off. He managed to keep the Independent TDs, on whom the Government relies for its survival, happy and avoided the kind of serious rows that could have undermined its cohesion. He also kept Fianna Fáil on side by staying within the parameters of the confidence-and-supply arrangement that underpins the Government’s arrangement with the main Opposition party and permits it to get financial measures through the Dáil.

As to the actual provisions of the budget, it contains a little bit for everybody. A small measure of tax relief for middle-income earners, increased pension and welfare payments and a range of extra spending programmes with particular emphasis on health and housing.

In the Dáil yesterday, Taoiseach Leo Varadkar appealed to his Fine Gael base by repeating the mantra that the budget was framed around the principle that “work should pay” but, in fact, the tax relief provisions were modest and amounted to a small element of the whole.

The budget package prioritised extra public spending over tax cuts by a ratio of two to one. Fianna Fáil can claim a share of the credit for this, as can the Independent Ministers. Ultimately it amounted to a compromise between the Government and main Opposition party, and while there may be a difference of emphasis, there is enough in it for both sides to claim the credit for the overall thrust of the package.

The Minister can also point to the fact that the budget stays within EU fiscal rules. The big question, though, is whether all the political compromises that went into its framing have produced the kind of budget the country needs.The big unknown is whether the forecast for economic growth of more than three per cent for next year and the year after can be relied on to materialise. On the basis of the State’s economic performance over the past year it would appear to be a reasonably safe bet. However, there is one overwhelming threat to this rosy prospect and that is Brexit. There is every chance that the UK will leave the EU in the worst possible way, with enormously damaging consequences for Ireland.

The decision to allocate €1.5 billion into a rainy-day fund does not change things very much as it will come from another government agency. While there were numerous references in the budget speech to the potential impact of Brexit, it seems as if the Government is basically hoping for the best. It is a strategy that will look very threadbare if the worst-case scenario for Brexit comes to pass.