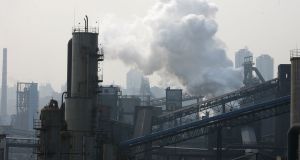 A Chineses steel plant. The country is locked in talks with the US to prevent an escalation of tariffs imposed by Washington on $250 billion (€220.5 billion) of Chinese goods.

China has lowered its target for economic growth this year, blaming in a rare admission the slowdown on the impact of the trade war with the US.

China’s premier Li Keqiang said on on Tuesday the country was aiming for economic growth in 2019 in a range of 6-6.5 per cent, down from a hard target of 6.5 per cent over the past two years.

The choice to set a range gives Beijing policy flexibility as it steers the economy out of years of debt-fuelled growth that has also buoyed the international economy.

“What we faced was profound change in our external environment,” Mr Li said in a report at the opening of China’s National People’s Congress in Beijing. International events “and especially the China-US economic and trade frictions, had an adverse effect on the production and business operations of some companies and on market expectations”.

China faces a number of challenges as growth slows - corporate defaults are on the rise and bad debt at the country’s banks is reaching a level not seen in nearly 20 years. Policymakers have long feared that a downturn in growth would impact ordinary Chinese people’s pockets and lead to social unrest.

The country is locked in talks with the US to prevent an escalation of tariffs imposed by Washington on $250 billion (€220.5 billion) of Chinese goods. China has countered with tariffs on $110 billion of US imports but media reports in recent days suggest the two sides could be nearing a deal to resolve the trade war.

Mr Li gave Beijing full marks for its response to the pressure from the US. “We handled economic frictions with the United States appropriately,” he told the 5,000 delegates in attendance.

But the premier acknowledged domestic concerns about the economic slowdown in his address, at times striking a dour tone.

“Instability and uncertainty are visibly increasing and externally generated risks are on the rise,” Mr Li said. “Downward pressure on the Chinese economy continues to increase, growth in consumption is slowing, and growth in effective investment lacks momentum.”

The move to change China’s economic growth target to a range from a single figure while maintaining growth above 6 per cent was in line with what many economists had expected.

The change would deliver two messages, Ting Lu, Nomura’s chief China economist, said in a note to investors. “Beijing recognises the current down-cycle and the inevitable decline in potential GDP growth rate, and it’s determined to achieve above-6 per cent growth to deliver its promise to double real GDP in the decade to 2020.”

The lowered target for growth in gross domestic product comes after China posted 6.6 per cent growth for the full year of 2018, the slowest annual growth in almost three decades.

“The government seems to understand the challenging growth environment as well as the economic and financial risks it faces on many fronts, but the emphasis seems to be on stability rather than reforms,” said Eswar Prasad, a senior fellow at the Brookings Institution.

Mr Li said China would not resort to a “flood of strong stimulus policies” to boost economic growth. However, the quota for local governments to issue bonds aimed at funding infrastructure will rise by about Rmb800bn ($120bn), a sign that spending on new projects will be an important source of growth this year.

China’s ministry of finance said on Tuesday it would target a fiscal deficit of 2.8 per cent, up 0.2 percentage points from last year, saying the economic slowdown would put its budget under pressure this year.

“Taking all factors into account, fiscal revenue faces a grim situation in 2019 and there will be great pressure to keep the budget balanced,” said the report from the Ministry of Finance.

The ministry also announced a cut of 3 percentage points to the highest bracket of value added tax, and a cut of 1 percentage point to a lower bracket, a move aimed at helping manufacturers. Robin Xing, an economist at Morgan Stanley, said the cut was worth about Rmb700 billion to Rmb800 billion, and that it was “above market expectations and should boost corporate earnings”.

The boost to corporate coffers comes as China rushes through a foreign investment law to help satisfy complaints from multinationals that have driven some of the friction with the US.

“The China-US trade war has not been good for anyone,” said Wang Zhonglin, a senior party official from Shandong province. “The Chinese government’s attitude has been clear: the great door of reform and opening up will only be opened ever wider.” – Copyright The Financial Times Limited 2019