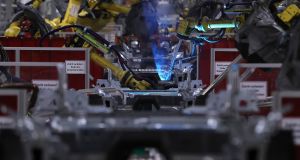 Car manufacturing in Wolfsburg, Germany. Expectations in the euro zone’s largest economy rose for the second time in a row. Photograph: Bloomberg

The euro zone economy showed a slight rebound for March, while expectations revealed a “ray of hope”. However, the single currency region remains weak overall, a survey released on Monday showed.

The bloc’s overall index clawed back some of its February losses but remains in negative territory as it rose to -2.2 in March from -3.7 a month earlier, the measure from research house Sentix showed. It had begun the year in January at -1.5.

It has not been in positive territory since it registered 8.8 in November. The current situation showed the seventh decline in a row as it hit the lowest since September 2016, while expectations rose for a third consecutive month at -10.3, nine points higher than in January.

“Even if there are increasing signs of an economic stabilisation in the euro zone it is too early to give the all-clear,” research house Sentix said in its statement released on Monday. “However, a ray of hope emerges when looking at the economic expectations.”

The expected values are still negative, the release said, but every “economic turning point begins with an increase in the expectation values”.

The overall index for Germany, with the economy still in a “precarious” state, rose to 4.0 from February’s 3.1, but way off the 20 recorded in October. Sentiment for the current situation registered 20.0, a fifth consecutive decline to its lowest reading since November 2014, widening the distance since October’s figure to 33 points.

Expectations in the euro zone’s largest economy, meanwhile, rose for the second time in a row. The index showed negative though at -10.8.

Meanwhile, a leading measure of sentiment in February showed pessimism intensifying among euro zone economic experts as they expect the pace of growth to slow. The Ifo’s survey, published on February 4th, revealed a flip into negative territory in its index for last month as it dropped below zero for the first time since 2014, diving from 6.6 to -11.1 points.

February’s Ifo business climate index for Germany fell to the lowest level since December 2014, reflecting the economy’s weakness, as pessimism increased for the outlook for the next six months.