Unemployment rate revised up to 5.6% but overall trend ‘still downward’

Fall in State’s jobless rate has slowed but is still falling, CSO says 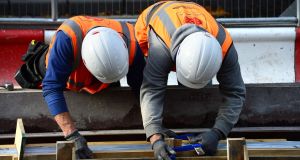 The State’s unemployment rate has been revised up to 5.6 per cent for February but the Central Statistics Office (CSO) insisted the overall trend is still downward, in keeping with the growth in employment.

The Republic’s jobless had previously been put at 5.3 per cent. The monthly rates are, however, benchmarked against the CSO’s Labour Force Survey, which provides a more accurate picture of the labour market, and therefore subject to revisions.

The latest figures show the seasonally adjusted number of people classified as unemployed was 135,100 in February, down 1,700 on the previous month.

The jobless rate for February was the lowest recorded since 2008 and is almost three points below the euro zone average.

While the fall in the number of unemployed has slowed, employment continues to grow strongly, increasing by 2.3 per cent last year to a record 2.28 million last year. On current trends the State’s jobless rate will fall to five per cent this year, a rate which several agencies here equate to full employment.

However, participation rates, particularly for women, remain lower than at the peak of the boom or by international standards.

The State’s youth unemployment rate was put at 13.8 per cent in February, a decrease from 13.9 per cent in January.

“ The continuing decline in the rate of unemployment is creating an increasingly competitive labour market that is likely to spur further wage growth,” Pawel Adrjan, economist at recruitment website Indeed, said.

Average weekly earnings in the final quarter of 2018 were up 4.1 per cent on the prior year, he said. “This was an acceleration in the pace of growth, that looks set to persist if the current trend of falling unemployment continues,” Mr Adrjan noted.

“With inflation remaining low these increases will translate into real wage growth and are likely to feed through into increased consumer spending and confidence,” he said.