Milestone in recovery as Greece looks to raise €2bn 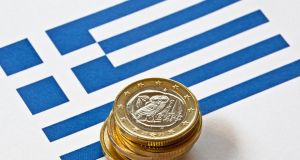 Greece on Tuesday plans to mark a milestone in its recovery from a bruising financial crisis when it sells 10-year debt for the first time in nine years.

The country has so far received more than €10 billion of orders for the syndicated offering of 2029 notes, according to an Athens bourse filing. The guidance is for the bonds to price between 3.9 per cent and 4 per cent, below an initial target of about 4.125 per cent. Greece plans to raise at least €2 billion, according to a person familiar with the matter, who asked not to be named because the details aren’t final yet.

Prime Minister Alexis Tsipras, facing a general election this year that polls show he’s set to lose, has pointed to bond sales as proof the country has turned a corner after its economy shrank by a quarter during the crisis.

After ending its bailout program last summer, Greece tapped the market for €2.5 billion of five-year bonds in January. The success of that sale, the country’s first in almost a year, paved the way for the 10-year issue.

Following the Tuesday sale, Greece will be almost two-thirds of the way to meeting its 2019 goal of raising as much as €7 billion this year.

Greek stocks and bonds have rallied this year, with the Athens Stock Exchange up more than 15 per cent and the yield on benchmark 10-year government bonds down below 3.7 per cent. The yield peaked at about 37 per cent at the height of the debt crisis in 2012, just before Greece defaulted on its debt to private-sector creditors.

The government last sold 10-year bonds in March 2010, with a 6.25 per cent coupon, as the country was in the eye of a storm after a new government revealed that its predecessor had hidden the true size of its budget deficit.

Greece’s travails opened a new chapter in the global financial crisis, and two months later it entered the first of three bailouts from the euro area and International Monetary Fund.

For other euro-area countries like Ireland and Portugal that followed Greece in having to take bailouts, issuing 10-year debt was seen as a key staging post in the journey to regaining economic sovereignty.

While it issued similar maturity debt in 2017, that was part of an exchange for bonds that were part of its debt restructuring.

Moody’s Investors Service on Friday raised Greece’s sovereign credit rating two steps to B1 from B3. Although that’s still four levels below investment grade, it gave a fresh boost to the government’s bond-selling plan following European Commission criticism that the government was dragging its feet on key economic reforms. – Bloomberg