Danny McCoy wants less saving for a rainy day, and more investment for a bright future 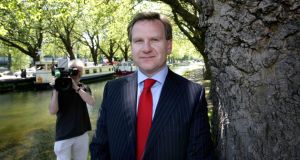 Ireland needs a massive increase in investment in infrastructure. That is the key message which Danny McCoy will preach at Thursday’s Ibec Business Leaders conference in Dublin. And he has a point. Money is cheap at the moment and Ireland, in McCoy’s words, has “a poor transport network, a jaded health infrastructure, an undersupply of quality housing and an education system at capacity”.

To achieve these goals a few changes would be needed. One is in the political system. The “new politics” has driven political decision-making further and further into short-termism – not a good backdrop for moving on projects which take years to complete.

More investment will also require a change in what McCoy calls the “austerity mindset”. This has led the Government to promise to put €1 billion a year into a “rainy day” fund and also to target a continued reduction in the debt-to-GDP ratio to as low as 45 per cent.

McCoy wants us to save less for a rainy day and invest more. The issue is how to also leave some leeway in the public finances if some kind of slowdown hits. Again this would come back to the politically unpopular route of holding down increases in public spending and even – whisper it quietly – introducing some new user charges, particularly if the public sector was to co-invest in some of the projects.

Some negotiations with the European Union might also be required in the context of staying within EU budget rules. These could conceivably form part of the wider Brexit talks, where the State can legitimately hope to get some leeway given the extent to which we will be hit.

Making progress here requires a mix of administrative change – particularly relating to planning – and a change in the way we manage and deliver the major projects. Without that, the risk is that much of the extra cash would disappear down the drain of waste and delay.