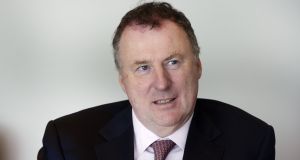 It would lead to the most contentious takeover situation on the Irish market in recent history, triggering a rival bid from a consortium involving One51 and the Cork-based Doyle shipping group, while developer Liam Carroll raised concerns of a three-way battle when he amassed a 29 per cent interest, using €175 million of loans from AIB.

The tussle ended in failure for all. AIB, which took control of Carroll’s position in 2009, sold the developer’s shares that November for half the value of the loans against them. The Doyles and One51 also sold their combined 24 per cent stakes over the following three years at a loss.

Over the intervening 10 years, the cash machine that is ICG has slashed its net debt level to below €38 million from more than €132 million, while its market value has doubled to €943 million and the group has delivered the safest dividend in town. Rothwell’s 15.4 per cent stake is worth €146 million.

But while the Iseq and most other companies in the Dublin market have managed to recover from a post-Brexit sell-off – and then some – ICG shares, despite having rallied by 25 per cent from their October lows, remain 10 per cent off where they were changing hands just before the UK referendum.

Looking at ICG’s full-year results on Monday, which saw 2016 earnings before interest, tax, depreciation and amortisation jump 11 per cent to a record €83.5 million, the stock’s failure to recover all of the ground lost following the UK vote may appear unjustified.

But there’s no getting around the fact that ICG is one of the companies on the Iseq most exposed to a potential fallout from Brexit, as well as to rising fuel prices.

The impact of increasing oil prices is “manageable”, according to chairman John B McGuckian (who, incidentally, has been on the board since 1988 – more than four times what the Institute of Directors believes is acceptable for someone to remain an independent non-executive director).

The ultimate impact from Brexit, however, is less clear.