Borrowing to be lower than predicted as social care funding rises, says chancellor 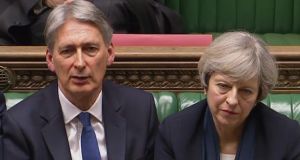 UK chancellor of the exchequer Philip Hammond and prime minister Theresa May in the British House of Commons for Mr Hammond’s maiden budget speech.

Britain’s economy will grow more quickly than expected this year but will slow down in subsequent years, chancellor of the exchequer Philip Hammond has announced in his spring statement. Borrowing will be significantly lower than previously predicted and Mr Hammond said the British economy was continuing to confound pundits with its strength.

As prime minister Theresa May prepares to start formal Brexit negotiations later this month, however, the chancellor warned that there was no room for complacency over the public finances. Although he announced more funding for social care, relief on business rates, and more money to open new grammar schools, spending increases were offset by tax hikes.

“Some have argued that lower borrowing this year makes a case for more unfunded spending in the future. I disagree. Britain has a debt of nearly £1.7 trillion, almost £62,000 for every household in the country. Each year, we are spending £50 billion on debt interest – more than we spend on defence and policing combined,” he said.

The Office for Budget Responsibility, which provides independent forecasts for the government, predicts that the British economy will grow by 2 per cent this year, revising its prediction upwards from 1.4 per cent. Growth is set to slow down to 1.6 per cent in 2018, however, before recovering slightly to 1.7 per cent in 2019, 1.9 per cent in 2020 and 2 per cent in 2021.

Mr Hammond left income tax rates unchanged but announced that the self-employed would pay a higher rate of national insurance, a move he claimed would make the tax system fairer.

“People should have choices about how they work, but those choices should not be driven primarily by differences in tax treatment,” he said.

Mr Hammond announced an extra £2 billion in funding for social care, which faces a crisis in England, with patients unable to leave hospital because of a lack of resources to care for them at home. The devolved administrations will receive more money too, with £120 million earmarked for a Northern Ireland Executive if it is formed.

As the markets responded with indifference to Mr Hammond’s statement, Labour leader Jeremy Corbyn accused the government of “utter complacency” about the state of the British economy.

“The prime minister came to office talking about fighting burning injustices. Less than nine months later she seems to have forgotten all about them, because none of them are being fought today,” he said.