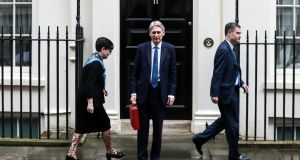 Philip Hammond mentioned Brexit only fleetingly in his spring statement, but Britain’s impending departure from the European Union loomed menacingly over the Commons chamber as he spoke. The chancellor presented an upbeat account of Britain’s economy, highlighting faster-than-expected growth this year and lower borrowing.

He acknowledged the economy will slow down next year and that inflation will hit 2.7 per cent this year. The inflation forecast may be conservative, given that the consumer price index rose by 1.8 per cent in the 12 months to January and the full impact of sterling’s depreciation following last year’s referendum may not have fully passed through the economy as yet.

The National Institute of Economic and Social Research predicts inflation will peak at around 3.7 per cent this year before falling back. Since wages are not keeping pace, such a high level of price increases will almost certainly hit consumer spending, which is driving economic growth.

The Office for Budget Responsibility (OBR), which provides the government with independent forecasts, acknowledged that households would see no benefit from higher growth this year.

The OBR explicitly blames Brexit for the slowdown in economic growth from next year, but conditions are likely to deteriorate further if the Brexit negotiations are difficult. With Brexiteers now openly predicting that Britain will leave the EU with no deal at all, Theresa May’s politically acceptable options are rapidly narrowing into a choice between a hard Brexit and a catastrophic exit with no trade deal with Britain’s European partners.

The chancellor has given himself leeway to respond to any shocks later this year in his autumn statement.

In the meantime, he faces a storm of protest over his decision to increase national insurance contributions for the self-employed, a clear breach of the Conservative party’s 2015 manifesto promise that there would be no hike in income tax or national insurance.