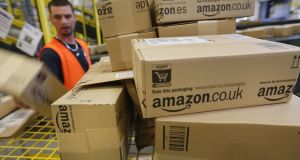 Multinational activity: Recorded losses at Amazon’s Cork-based subsidiary has to be seen in the light of the fact that it was other companies in the group that paid for the entity’s services. Photograph: Seán Gallup/Getty

The figures in the annual accounts for Cork-based Amazon CS Ireland Ltd are of the variety that tends to spark the interest of tax wonks in NGOs, the OECD and the European Commission.

The company operates a customer services centre that provides support to the group’s companies internationally. A geographical breakdown of the company’s figures is not given for fear they might be of use to competitors.

Amazon CS had an average of 904 employees during 2016, during which time staff costs were €39 million. These are real figures of great interest to Ireland Inc. The company had a turnover of €98.7 million and incurred a pretax loss of €2.9 million. Those figures are probably not of such great interest.

The recorded loss has to be seen in the light of the fact that it was other companies in the group that paid for the services of the Cork-based entity. At year’s end the debtors (amounts falling due within one year) figure included €18.1 million due from its parent company, which is Amazon EU Sarl.

Amazon EU Sarl is one of at least 14 Amazon subsidiaries based in the small, western-European duchy which was the centre of international controversy some time ago in relation to its tax deals with multinationals. Amazon EU Sarl is the company that tends to bill you when you buy products from Amazon in this part of the world. It accounts, or certainly used to, for up to a fifth of the online retailer’s global turnover. (Net turnover in 2015 was €18.6 billion.)

The Luxembourg company is the centre of the European Commission’s state aid investigation into Amazon. A preliminary ruling on the matter in 2015 centred on a tax deal Amazon EU Sarl negotiated with Luxembourg authorities in 2004 which, the commission believes, was so generous as to constitute state aid.

Amazon says it is in compliance with the EU’s state aid rules. How any finding otherwise might affect the Cork operation is not at all clear, and it could well be negligible. Still, it is interesting that there are two Cork-based multinational operations keeping an eye on the state aid ruminations of our friends in Brussels.