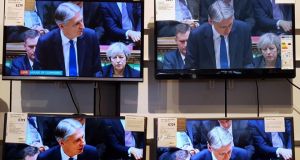 One of the big set pieces of the UK economic year took place on Wednesday, as chancellor of the exchequer Philip Hammond presented his first budget. Here are the implications for Ireland

1: Growth. The UK economy has remained stronger than expected after the Brexit referendum, with official estimates now that GDP growth will be 2 per cent this year, well up from earlier forecasts of 1.4 per cent. This will provide some help to Ireland, as the UK is one of our biggest export markets and is particularly important for indigenous sectors such as the food industry.

Ratings agency Standard and Poor’s warned on Wednesday that UK growth was starting to be affected, however. Longer-term official forecasts for growth, presented as part of the budget, reflect this. The estimate for 2018 UK growth was cut slightly to 1.6 per cent and for 2019 the prediction is nearly 0.5 of a point lower at 1.7 per cent.

Taking all the pluses and minuses, the overall size of the UK economy would be roughly the same in 2021 as previous estimates, according to the official forecasts. Significant uncertainty surrounds these forecasts due to the move to Brexit and all the unknowns it brings, however. The Brexit hit is coming, but nobody knows quite when, or how severe it will be.

2: Sterling. A key factor for Ireland is the sterling exchange rate. In the wake of the vote, sterling went up briefly over 90p to the euro, but subsequently fell back to well under 85p, a much more comfortable level for Irish exporters. It is now weakening again, however, and was over 86.5p to the euro on Wednesday as the budget was delivered. It will be interesting to see how sterling reacts in the days ahead and as the formal talks get under way.

3: Corporation tax. The budget confirmed that the main UK corporation tax rate will continue to drop, falling to 19 per cent from next April and to 17 per cent in 2020. This drop from 28 per cent up to 2010 gradually is bringing the UK rate closer to our 12.5 per cent rate.

The chancellor declared that Britain was “open for business” and it clearly will seek to compete with countries such Ireland more aggressively for FDI post-Brexit.

The trading arrangements it makes with the EU post-Brexit will be central to what it can achieve here. The chancellor made no mention of earlier hints from UK prime minister Theresa May that the rate could fall further than the planned 17 per cent.

4: Business incentives. Hammond said he wanted the UK to be “ the best place in the world to start or grow a business” – echoes of Enda Kenny’s pledge to make Ireland “the best small country in the world in which to do business”. As Brexit arrives there will be competition between Britain and Ireland to attract investment as some UK firms look overseas for bases within the EU, but some Irish firms will look to establish or build UK bases to be able to serve that market more easily post-Brexit. Big multinationals with Irish bases may also move some operations to the UK for the same reason.

The budget announced tweaks in the administration of R&D reliefs and reductions for some companies in business rates as the UK seeks to get as much investment as possible. There will be big investment shifts between Britain and Ireland as the Brexit talks progress and it is shaping up as quite a battle.

5 . The sugar tax: The UK is due to introduce a tax on sugary drinks in April 2018 – and Minister for Finance Michael Noonan has announced plans to follow here, from the same date. He has not finalised his plans as he has engaged in a consultation process here, the results of which will feed into next October’s budget.

The chancellor announced that as manufacturers in the UK are already using less sugar, the tax will raise less than expected. Forecasts for additional revenue here may also have to be adjusted – but the evidence suggests that as a health measure the charge has had some impact even before coming into effect.