Calls for a State ‘prudence account’ and Trump’s peculiar authenticity 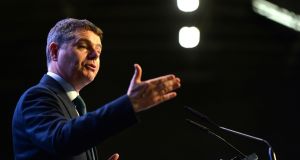 The government will this week be told by the state’s fiscal watchdog that it should direct billions of euros in corporate tax revenues into a “prudence account” rather than spending it on services or tax cuts. Jack Horgan-Jones reports that the Irish Fiscal Advisory Council argues a total of €12.3 billion could have been set aside and used as a buffer when the economy slows down if the prudence account had been employed in recent years.

Digital companies such as Facebook and Google will soon have to pay taxes regardless of their physical presence or measured profits in a country after G20 finance ministers agreed to accelerate a radical shake-up of cross-border corporate tax.

A group of shareholders at Irish explorer Karelian Diamond Resources are seeking to remove the company’s board after alleging that large amounts of money raised for development have instead been spent on directors’ salaries.

Tech veteran Brad Keywellhas been named EY World Entrepreneur of the Year for 2019. Keywell, who previously co-founded Groupon, wins for latest venture Uptake Technologies, which makes software that monitors and analyses industrial equipment to improve the performance and maintenance of the machinery.

The boss of recruitment company CPL Resources has called for the Irish education system to be overhauled as it is no longer adequately preparing young people for the workplace. Anne Heraty said: “Our education system is set up for an industrial era and it hasn’t really changed in a hundred years.”

Scottish regional carrier Loganair is in discussions about codesharing with Aer Lingus. It comes as the Scottish carrier gears up to launch flights from Carlisle Lake District Airport to Dublin from next month. It will also fly from the airport to Belfast and London Southend.

Six production companies shared €18.7 million in commissions from RTÉ, which amounted to 52 per cent of the value of new RTÉ television commissions from independents last year, according to the annual report for RTÉ Independent Productions.

In this week’s column, Chris Johns argues that British politicians could learn from Trump’s peculiar authenticity. “Only two potential prime ministers possess authenticity: politicians who say what they mean. One is Nigel Farage. He has a Trump-like authenticity. The other authentic candidate is Rory Stewart. He is worth watching.”