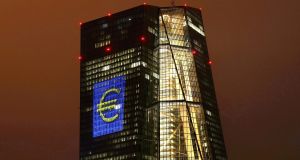 The latest ECB meeting comes amid growing concerns that the euro zone’s economy will not generate a sufficient level of inflation for the ECB to hit its price stability target of just under 2 per cent. Photograph: Reuters

Mario Draghi is preparing to cut interest rates and embark on a fresh round of bond purchases before he leaves the European Central Bank this autumn, in a bid to boost the eurozone’s economy and combat mounting global uncertainty over trade.

The bank was ready to “use all the instruments that are in the toolbox” if the slowdown in the bloc’s export-driven manufacturing sector began to infect other parts of the economy, the ECB president said at a press conference on Thursday after the bank’s policy meeting, adding that “the policy space is there” for any necessary measures.

The bank’s governing council had started discussions on the detail of how to address investors’ fears that weak inflation and growth would continue to weigh on the single currency area, Mr Draghi said.

He specifically mentioned a fresh expansion of the bank’s €2.6tn quantitative easing programme and rate cuts as possibilities, but insisted that the central bank’s efforts would need to be matched by a boost in public spending by the region’s governments.

At the meeting, the ECB extended its pledge to keep rates on hold at record lows until the middle of 2020 as policymakers grapple with mounting concerns about weak inflation. Mr Draghi signalled that the next move in interest rates - specifically the deposit rate - was more likely to be down than up.

His remarks capped a dovish week for the world’s two most important central banks. Jay Powell, chair of the US Federal Reserve, said earlier this week that he was prepared to cut rates should the global trade war begin to affect the US economy.

After rising 0.5 per cent against the dollar earlier in the day, the euro fell back after Mr Draghi said the bank was willing to take bold new measures.

The bank believes it has significant headroom for fresh QE, due to the hitherto slight fiscal expansion in the eurozone and European Court of Justice judgements on earlier bond purchases.

The bond-buying programme, which began in the spring of 2015, was halted at the end of last year. But the ECB is still struggling to hit its price stability target of less than 2 per cent. Inflation fell sharply in May to 1.2 per cent.

While some bounceback is expected in June, a closely watched measure of markets’ price pressure expectations, the so-called five-year-on-five-year inflation swap rate, is less than 1.3 per cent and close to levels last seen in 2016, when the ECB ratcheted up monthly bond purchases through QE from €60 billion to €80 billion.

The ECB projects that inflation will remain below target across the forecast horizon, reaching just 1.6 per cent in 2021.

Risks remain tilted to the downside due to geopolitical uncertainties, rising protectionism and vulnerabilities in emerging markets, Mr Draghi said, stressing that the ECB stands willing and able to act if evidence of a slowdown mounts.

The ECB’s governing council left the benchmark main refinancing rate at zero and the deposit rate at minus 0.4 per cent. In a move supported unanimously by the 25-member council, the bank strengthened its message on borrowing costs, saying it now expected to keep both interest rates on hold “at least through the first half of 2020”. It had previously said it expected rates to stay on hold “at least until the end of 2019”.

Mr Draghi rebuffed suggestions that negative rates were damaging the health of the eurozone’s banks, saying “so far we see no effect”. But he signalled that the ECB could review the way it applied the charges on banks, should economic conditions warrant further rate cuts. - Copyright The Financial Times Limited 2019

7 GameStop focus of war between Wall St and small investors