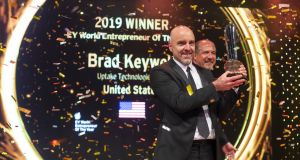 US tech veteran Brad Keywell has been named EY World Entrepreneur of the Year for 2019. Photograph: Daniel Candaux

Tech veteran Brad Keywell has been named EY World Entrepreneur of the Year for 2019.

Mr Keywell was selected from among 57 finalists representing 47 countries, including Ireland, at a gala ceremony held in the Salle des Étoiles in Monaco on Saturday.

The serial entrepreneur, who previously co-founded daily deals website Groupon, is the third American to take home the award since it was established 19 years ago.

Uptake makes software that monitors and analyses industrial equipment to improve the performance and maintenance of the machinery.

The company works with organisations across multiple industries to help them determine when a piece of equipment is not performing well or is about to break down. It analyses data from sensors on equipment and then uses data-science models to predict problems before they occur.

Customers include the US army, American Red Cross, Caterpillar and Rolls-Royce.

Established in 2014, the company has grown to 500 people and, just three years after its founding, was ranked the fastest start-up globally to have reached a $2 billion (€1.76 billion) post-money valuation.

Mr Keywell said he got the idea for the company when he went to pick up his daughter from an airport, only to find her flight had been delayed because the airline didn’t have the right part to hand.

A serial entrepreneur, the 49-year-old has founded 14 companies, the best-known of which is Groupon.

Speaking after being awarded the award, the tech veteran spoke of the importance of entrepreneurs in the world.

“Entrepreneurs tend to carry humanity forward in little baby steps, and once in a while, big leaps,” he added.

In addition to his success in founding tech companies, Mr Keywell and his wife Kim are also known for having established their own charitable foundation. They also previously joined Bill Gates, Elon Musk, Warren Buffett, Michael Bloomberg, Mark Zuckerberg, and many others in signing The Giving Pledge, which commits wealthy individuals to giving the majority of their fortune to philanthropic causes.

Dan Mackey and Peter Coppinger, the founders of Cork software-as-a-service (SaaS) company Teamwork, represented Ireland at this year’s awards, having been named the Irish EY Entrepreneurs of the Year in October.

The 2019 finalists have companies with combined annual revenues of $44 billion (€38.8 billion) and which employ more than 159,000 people. Representing 11 industry sectors, the finalists have produced a combined revenue growth of 257 per cent in the last three years.

The EY Entrepreneur network, which has been active for more than 30 years, now has programmes in more than 145 cities in over 60 countries.