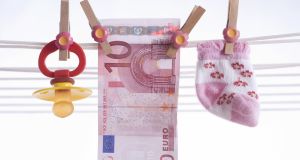 ‘Child benefit is paid to mothers, this does not protect them from personally experiencing deprivation. Photograph: iStock

In 1977, the UK’s Labour government decided that child benefit would be paid to mothers, rather than, as previously, to fathers. This change reflected a gradual move away from a patriarchal society.

Ireland had legislated three years earlier, in 1974, to pay children’s allowance directly to mothers. The sponsoring minister, Frank Cluskey, said that, prior to the change, 85 per cent of fathers had already nominated the mother to directly receive the payment.

The UK’s “wallet to handbag” transfer sought to rebalance household resources in favour of women and children. Where both partners are working and each has a reasonable level of independent income, redistributing income within households is not a great issue – partners can choose to pool their resources or to operate largely independent budgets.

Paying any welfare benefits directly to women is one way of ensuring that such women have some degree of independent income and financial autonomy. However, the UK’s child benefit change was seen as particularly important as an anti-poverty measure for single-income and low-income households.

There was a concern that in some families, women, and especially children, might not be adequately provided for in how overall household income was shared or spent. The change could help reduce poverty affecting women and children in those households where little pooling of resources took place. Where resources were already being fully shared within households, the move would make little difference.

There was also concern at the time that there could be a backlash, with the move being counterproductive if fathers reacted by reducing their contribution to shared household spending. For example, a Conservative MP complained in parliament that “far from being a child benefit scheme, it looks like being a fathers’ dis-benefit scheme”.

Subsequent research has examined the effects of the policy change on British household behaviour, by looking at family spending patterns before and after the change. If households had already been sharing all their sources of income, and making joint decisions on how to spend it, spending patterns would not have been affected by the transfer of resources from fathers to mothers. However the research showed that, for a significant number of families, spending patterns did actually change, with a substantial increase in the share of household income spent on children’s clothes and, to a smaller extent, on women’s clothes.

So the researchers found that, for some British families, and especially low-income ones, decisions on how family resources are spent depend on who receives the income. They concluded that the reform reduced poverty among women and children within households, poverty which can be masked when only looking at the household as a unit.

Until recently, there has been very little analysis in Ireland on how income-sharing within households might impact on family poverty. In a 2016 study, the Economic and Social Research Institute’s Bertrand Maître and Dorothy Watson examined this question, using a special data set for 2010 from the Central Statistics Office. This data, which charted the extent to which income was shared within households, and included measures of deprivation for individual household members, allowed a more sophisticated approach than in the UK study.

The data showed that, in two-thirds of households, resources were fully shared within the family. The ESRI research, which focused on heterosexual couple households, analysed the extent to which male and female partners may derive different benefits from the couple’s combined resources. The research sought to establish whether poverty and deprivation of individuals may be “hidden’’ within households that are relatively better off.

The findings showed that, while in low-income households each family member may be at risk of poverty, there is no systematic tendency for the woman in a couple to be more likely than her male partner to lack access to goods and services, or to experience material deprivation. However, although child benefit is paid to mothers, this does not protect them from personally experiencing “material deprivation”.

The findings for low-income households, where poverty is a risk, is that the additional resources are normally spent by mothers in the interests of their children.

The authors’ conclusions suggest that we do not have a problem of hidden female poverty masked within the wider household.