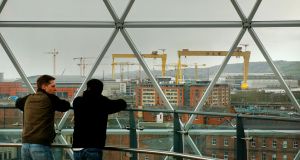 Belfast from the observation dome above the Victoria Square. Photograph: Peter Macdiarmid/Getty

Northern Ireland businesses blame Brexit for a sharp drop in export orders last month according to a new economic report, which shows there was a further slump in business activity during May. The North’s employment numbers also fell for the fifth month in a row.

According to Richard Ramsey, Ulster Bank’s chief economist in Northern Ireland, companies in the North had been stockpiling at a rapid rate in advance of the original Brexit departure date, March 29th. However, when the UK was granted an extension, this had a significant impact on business activity in the North.

Mr Ramsey said: “What the latest PMI suggests is that the global slowdown which had been impacting other economies is now clearly evident within Northern Ireland. Brexit stockpiling by manufacturing companies had been inflating the performance of local firms in recent months.

“Now that the rapid phase of stockpiling activity has passed, the latest PMI data reflects the reality of current demand. This is weakening in both the domestic and overseas markets, with output at a 76-month low and orders falling at an 81-month low.”

The latest PMI report underlines how output fell across all four sectors in the North for the first time in six years.

The construction sector had seen orders fall for nine months in a row while retailers had also reported a slump in sales since the beginning of the year but both the manufacturing and services sectors also suffered significant declines during May and current order books do not suggest that this trend is likely to be reversed anytime soon.

The combination of Brexit uncertainty, which will continue to dominate the agenda both at home and in export markets, plus the double negative of a lack of government at Stormont, is just some of the factors, according to the PMI report, why Northern Ireland firms are currently the “the least optimistic in the UK”.

1 European Commission to appeal Apple tax ruling on Friday
2 Ireland is in danger of losing the woods for the trees on emissions reduction
3 FinCEN Files: Dublin-listed fund sent $23m to firm suspected of links to Russian crime boss
4 Coronavirus response must not kill the futures of Ireland’s young
5 FinCEN Files: Scale of challenge facing financial regulators revealed in leaked documents
6 Period of ‘extreme stress’ beckons for Irish businesses
7 Korn Ferry Ireland appoints Bob Casey managing director
8 PTSB names former Grant Thornton partner as interim CFO
9 The wealth of the Irish – how do your assets match up?
10 How to bring a hotel group through a pandemic
Real news has value SUBSCRIBE