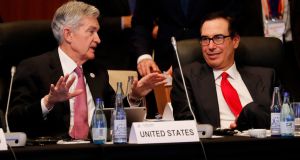 Digital companies such as Facebook and Google will soon have to pay taxes regardless of their physical presence or measured profits in a country after G20 finance ministers agreed to accelerate a radical shake-up of cross-border corporate tax.

In a communiqué issued after their meeting in Fukuoka, Japan, finance ministers from the world’s largest economies said they aimed to agree on new rules “by 2020”. But there are still big differences to resolve, with the US, home to most of the world’s digital giants, opposed to rules that treat digital companies differently to others.

The proposals will lead to higher tax bills for some of the world’s most valuable companies and transform the basic tenets of international tax for a world where economic value comes from flows of ideas and data rather than physical goods.

“We have a new economic model based on digital activities and based on the sale and exchange and use of massive data,” said Bruno Le Maire, the French finance minister. “For the time being there is no fair taxation of this new economic model.”

Digital companies provide their services across borders and can often choose to book sales in a low-tax jurisdiction. Countries may have no way to tax profits from internet advertising, for example, even if the adverts are bought by their citizens and shown to their citizens.

The UK and France are both bringing in digital services taxes based on the local sales of search engines and digital marketplaces. Because they target sales and not profits, however, there is a risk of double taxation.

“The US has significant concerns with the two current taxes that are being proposed by France and the UK,” said Steven Mnuchin, the US Treasury secretary. He said the European taxes had “created an urgency for us to deal with this issue”.

Mr Le Maire and Philip Hammond, the UK chancellor, both vowed to scrap their digital taxes as soon as there was an agreed G20 approach.

The G20 is looking at various ways to tax digital companies. One idea is to calculate the “non-routine” profits made by a digital company. Another approach is to use existing calculations of profits and then reallocate part of them to different countries. A third possibility is to specify a “baseline profit” for marketing and distribution in any given country.

The new system will also need a set of rules to decide when a digital company is actually involved in a national economy – for example, generating content from a community of users who live there – rather than simply selling a product across borders.

“Global tax rules should still aim to tax businesses based on where they create value, not just on where they make sales,” said Mr Hammond. “We need to ensure the reformed international tax system continues to reward countries for creating attractive business environments.”

Despite disputes over the form and scope of the new tax rules, the G20 ministers signalled there was no alternative to a reform. “It sounds like we have a strong consensus,” said Mr Mnuchin. “So now we need to just take the consensus... [and] turn this into an agreement.”

Following their discussion on the global economy, the G20 ministers declared that “trade and geopolitical tensions have intensified”, while growth is low and “risks remain tilted to the downside”.

With the US and China locked in a trade war, persuading them to agree on a communiqué is a positive sign ahead of the G20 leaders’ summit in Osaka at the end of the month. However, the finance ministers offered no new policy pledges to reduce trade tensions or tackle risks to the economic outlook.