Planet Business: It’s all kicking off in France today 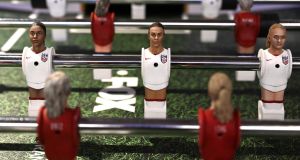 USA soccer player Carli Lloyd (centre) is seen in foosball figurine form, surrounded by representations of her teammates ahead of the Fifa Women’s World Cup. Photograph: Timothy A Clary/AFP

Image of the week: Women’s foosball

Women’s soccer is one of the fastest-growing sports in the world and with the Fifa Women’s World Cup kicking off in France today and promising to attract more sponsor, media and fan interest than the previous seven tournaments, it seems as good as time as ever for women to venture into the hitherto male-dominated world of foosball figurines. Here, USA player Carli Lloyd (centre) is seen represented on a first-of-its-kind foosball table, which was given to the defending champions ahead of the event by somebody clever at Fox Sports.

In numbers: Lost in navigation

Number of miles covered by Apple vehicles “to rebuild the base map” of its Maps app and help more lost and confused people find their way, as opposed to leaving them further lost and confused.

Share of the navigation app market enjoyed by Google, according to one 2018 survey by tech reviewers The Manifest.

Years since Apple chief executive Tim Cook issued a public apology for the software and said it was “doing everything we can to make Maps better”.

Ai-Da was named after the mathematician Ada Lovelace, but she’s more of an artist – in fact, she’s putting on her first solo exhibition at the University of Oxford from next week. Ai-Da likes to draw, paint, sculpt and delay people on benches in darkened video art rooms, and she’s generally seen as something of a pioneer. “She” might be eligible for the Turner Prize, however, because she’s the pencil-equipped robot putting the “art” in artificial. Ai-Da, created by Cornwall robotics company Engineered Arts, apparently produces work meant to make people ponder the uses and abuses of AI in the world. Like nonsense art exhibitions, for example.

The Forbes magazine list of the US’s richest self-made women contains celebrity names such as Rihanna, Serena Williams and Kylie Jenner (whose appearance last year had people debating the accuracy of the label “self-made”). But who are the top five in this year’s ranking?

5. Thai Lee. Worth $3 billion, the South Korean-born entrepreneur bought a software reseller from her now ex-husband for less than $1 million in 1989 and it’s now the $10 billion IT provider SHI.

4. Judy Faulkner. She founded medical software company Epic Systems in a basement in 1979 and now has a net worth of $3.6 billion.

3. Marian Hitch. She dropped one place, but the good news for Hitch is her $3.7 billion fortune is in pizza – in the Little Caesars pizza chain to be precise.

2. Meg Whitman. Now the chief executive of yet-to-launch short-form video start-up Quibi, the one-time boss of Hewlett Packard and eBay rose one spot and is worth $3.8 billion.

1. Diane Hendricks. Nothing to do with the gin, sadly, but the co-founder with late husband Ken of a massive roofing company, is worth $7 billion and has widened the gap on the rest. She started out as a dairy farm and pen factory worker.