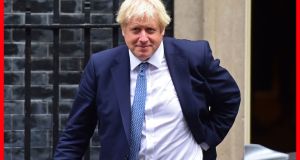 British prime minister Boris Johnson: nobody has provided a concrete assessment of how Irish trade with continental Europe, the trade that uses the UK land bridge, will be affected. Photograph: David Mirzoeff

Another week and another clatter of Brexit warnings. First we had the Economic and Social Research Institute (ESRI) saying we could be flung into a recession next year if Brexit turns messy. Messy means if supply chains break down and the financial markets push sterling to parity with the euro. This could see the economy here contract by 1 per cent next year, the think tank warned, a scenario that may warrant a supplementary budget.

Then came Central Bank deputy governor Ed Sibley’s warning that there was now no excuse for financial firms not to be Brexit-ready given the potential shift in circumstances has been signposted for more than three years.

As we approach the October 31st cliff edge – and even this might prove a false milestone – the warnings appear to be getting more shrill. The ESRI’s 1 per cent contraction forecast is the most negative yet. The Government has predicted that economic growth here might fall to zero in the worst-case scenario.

The problem is that nobody has a good handle on the short-term impact of the UK’s divorce process. Economic models are adept at capturing the five-year, or 10-year impact on trade but accounting for how a 20-mile tailback of lorries at Dover – or a two-week delay in the supply of a vital component – might affect businesses is more difficult.

“That’s the one big omission from the current suite of numerical estimates on the impact of Brexit,” the ESRI’s Martina Lawless said recently. “We have a good picture of the longer run but that’s basically when firms have adapted to the new world in which the UK is not in the EU anymore,” she said. It’s the transition period that’s the big unknown.