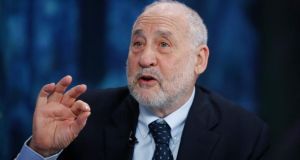 Joseph Stiglitz this week said Ireland was not being a good neighbour to other EU countries. File photo. Photographer: Simon Dawson/Bloomberg

The latest comments by celebrated US economist Joseph Stiglitz on Ireland’s policy on corporate tax are just the latest blow to the State’s reputation in this area. This is damaging as talks intensify at the OECD on a new deal on corporate tax worldwide. If these talks move towards consensus, Ireland will now be under pressure to agree to whatever emerges.

At a conference in Paris on Thursday, Stiglitz initially said that Ireland was not being a good neighbour to other EU countries, from whom it was robbing tax revenues. Ireland was not only a tax haven but it also is not a good EU citizen, he said, though later adding that some of his initial comments were too strong.

Few will pay any attention to the qualification, particularly as Ireland has been subject to a string of such attacks from academics and some international tax experts, including other top economists such as Gabriel Zucman of the University of California. A recent International Monetary Fund discussion paper was also highly critical.

The Government has tried to fight back, saying that Ireland was making significant changes and has a transparent regime.

Some of the singling out of Ireland is over the top – US tax rules played a big part in this story over the years, as did countries such as the Netherlands and Luxembourg. But there is no doubt that we are exposed here and that devices like the double Irish, now being slowly phased out, were part of a global story which allowed for widescale tax avoidance. Ireland is now widely referred to in media reports as a tax haven – most recently this week by the influential Financial Times.

Fair or not, this helps to shape the battleground at the OECD.

Ireland will be concerned about the possible lack of tax revenue. But the Government will be even more worried that plans for a minimum corporate tax rate could damage our ability to compete for foreign direct investment. A lot will come down to where this rate is set and how it applies.

And the problem for Ireland as this debate reaches the crunch is that the international view of our regime is now so bad that it risks undermining whatever bargaining power we have.