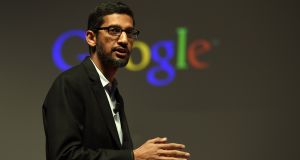 Knowing how to stay safe on the internet is a priority for everyone. That is even more the case for children, digital natives who run the risk of taking the online world for granted without a backward glance at the potential for harm.

In an era of trolls, scams and hackers, it can be all too easy for a moment of carelessness to lead to financial loss or, worse, abuse or a stalker.

So it is good to see a programme that aims to “empower younger children to use the web safely and wisely”.

Google chief executive Sundar Pichai was in Dublin on Wednesday to show his company’s support for children’s charity Barnardos’s initiative to make the internet safer for more than 75,000 children. Google has provided grant aid to allow Barnardos expand its programme.

And for those who cannot access the Barnardos scheme, Pichai unveiled Google’s own Be Internet Legends initiative. This provides resources for children, their parents and teachers to get the internet safety message.

It all made for a lovely picture. But you have to wonder whether Google really is the appropriate company for Barnardos to have as a sponsor in this area.

After all, just this month, Google was fined $170 million (€154 million) for alleged violations of child privacy legislation in the US through its YouTube subsidiary.

The fine – the largest to date for violations of the Children’s Online Privacy Protection Act – came as the Federal Trade Commission and the New York attorney general alleged the company was tracking the viewing histories of children in order to help advertisers target them with products .

Google has also, with other tech companies, been forced to admit that it has had staff listen into audio recorded by it digital speaker, the Google Assistant, without the knowledge or approval of customers or their children.

Perhaps Pichai would be better advised to focus on making sure his companies’ products protect the privacy of customers and are safe for younger users rather than putting the onus on them.