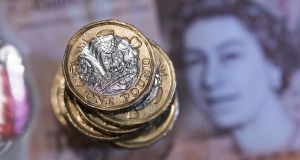 Charting a positive way forward for sterling is difficult, with the fresh dislocation of a general election likely in the coming weeks or months

Sterling slid again on Friday in the face of continued political deadlock and increasing evidence that the uncertainty is wreaking damage on the British economy.

Sterling was on course for its worst week since early August as it fell back below $1.23 on Friday, leaving the currency more than 1.5 per cent lower for the week.

The Brexit uncertainty is not only weighing on the pound. The euro fell to its lowest level since May 2017 on Friday, and was recently trading at $1.093. The single currency has been weighed down by signs of a possible coming recession and is also suffering from the lingering Brexit crisis.

Despite a week of political theatre in the courts and the Commons, investors say they are still struggling to see a way through the Brexit roadblock, and there are few signs that the EU will grant prime minister Boris Johnson a fresh exit deal.

“All options are on the table, and the muddle through compromise seems to be the least likely of them...so as a result the pound is very jittery,” said Trevor Greetham, head of multi-asset at Royal London Asset Management, which has been reducing the exposure of its funds to the currency.

Mr Greetham said the fund manager has been applying the same sort of currency management techniques it would use for emerging markets, including watching implied volatility for signs of coming stress.

The pound is still more than 1 per cent higher for the month as it has risen nearly 3 cents against the dollar as parliamentarians have legislated against a no-deal Brexit next month.

However, charting a positive way forward for the currency seems difficult, with the fresh dislocation of a general election likely in the coming weeks or months.

“The path to Brexit may be more uncertain than at any time in the past,” Barclays macro-strategists said in a note.

The bank now expects an eventual no-deal Brexit and subsequent shallow UK recession, but warned that uncertainty was “unusually high” in its forecasts.

Friday’s fresh fall in the pound came after a senior Bank of England official said the central bank could still lower interest rates even if the UK avoids a no-deal Brexit.

Michael Saunders laid out the damage the Brexit uncertainty was doing to the British economy. “Persistently high Brexit uncertainties seem likely to continue to depress UK growth below potential for some time.”

There was fresh evidence of the UK economy’s fragility released soon after Mr Saunders spoke, with European Commission data showing manufacturing sentiment has dropped to its lowest level since 2009 and is undershooting the euro zone.

“We continue to think that the pound will ultimately get dragged lower by similar forces to those acting on the euro; in other words a general ‘buyer’s strike’ in both pairs,” Stephen Gallo, European head of FX Strategy at BMO Capital Markets, said in a note. – Copyright The Financial Times Limited 2019