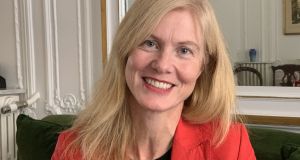 Sinead Lonergan: “We crossed the €1bn mark in sales to France for the first time in 2018”

Enterprise Ireland, the Government agency which helps Irish firms to export, will open an office in Lyon, its second in France, on Wednesday, as Brexit sees it focus more on continental Europe.

“We are focusing on driving business into the euro zone. There’s an urgency because of Brexit,” says Sinead Lonergan, the agency’s director for France.

“Irish companies are asking questions about the UK market, whether supplies will be able to use the landbridge from continental Europe. They have to re-evaluate the supply chain.”

Mitigating the risk of Brexit was “an obsession” with Enterprise Ireland, said Ms Lonergan.

The agency had set itself the goal of increasing exports to the euro zone by 50 per cent between 2017 and 2020, through accelerating the growth of Irish companies already present, and by bringing more companies into the market, particularly those which are Brexit-exposed. Enterprise Ireland will hold a euro zone training programme in Paris in December.

The slight improvement in the French economy and growing awareness in Ireland of France’s potential as an export market also encouraged the agency to set up in Lyon.

The new office will be headed by Claire Tobin Mercier, who set up the Lyon office of Irish diagnostics group Biotrin 25 years ago. Ms Mercier will be assisted for the next two years by a recent business graduate from Trinity College Dublin. Another intern will work with Enterprise Ireland in Paris.

Sean Canney, the Minister of State for Natural Resources, Community Affairs and Digital Development, has travelled from Dublin for the Lyon opening. He will be accompanied by Ambassador Patricia O’Brien and representatives of 15 Irish companies.

“We are going to pitch the capabilities of Irish SMEs in the pharmaceutical sector,” Ms Lonergan said.

Most of the world’s pharmaceutical giants, including Abbott, Merck, Pfizer, Sanofi and Servier, have plants in Ireland.

“We have gained huge expertise in building plants to the highest specifications. They are showcases to the rest of the world of what we can do in hi-tech pharma manufacturing,” Ms Lonergan said. “Galway is a centre of excellence for medical devices. The vast majority of the world’s stents are produced in Ireland.”

Two Irish companies manufacture blister packets for medication. One is already in Lyon.

The group will visit Bio-Mérieux, the Lyon-based, family-owned pharmaceutical company which is “hugely open” to Ireland. Bio-Mérieux owns a laboratory in Ireland, and already has a small number of Irish suppliers in France.

“We want to increase that,” Ms Lonergan says.

The Lyon group will focus on industrial engineering as well, visiting the local Kingspan plant. The Cavan-based company now supplies more than half of all insulation panels in France. Kingspan will receive an award for impact on climate change at the France Ireland Chamber of Commerce business awards in Paris on Thursday.

Grant Engineering, a manufacturer of wood pellet stoves from Offaly, and Tricell, a Killarney-based manufacturer of septic tanks, are other Irish businesses that have done well in France.

Irish exports to France grew 9 per cent last year, Ms Lonergan said. “We crossed the €1 billion mark in sales to France for the first time in 2018.

“Lyon is the leading manufacturing centre in France. It’s almost like a miniature Paris, but things get done more quickly and easily. People talk to you more. You get time to have lunch with business contacts. It’s more relaxed.”

The city and regional governments in Lyon have been very effective in making introductions “and that’s gold dust in Lyon”, Ms Lonergan said.

“Once you make the decision to set up there it’s extraordinary what happens. It’s definitely easier than Paris.”