Entrepreneurs in Uganda are taking control of their own destiny 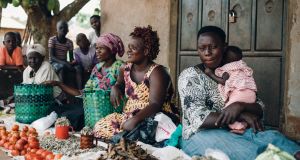 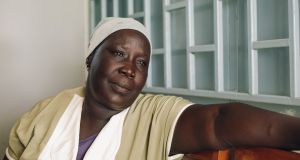 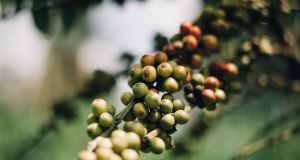 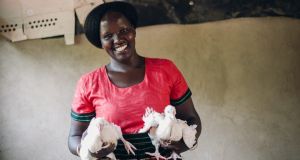 Poultry producer Josephine Awilli. Access to a small loan and training in animal husbandry allowed her to start rearing chickens. In a matter of months, she has gone from having 150 birds to 300. Photograph: Fionn McCann Photography 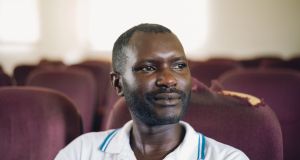 On a sweaty afternoon in a facility about an hour north of Ugandan capital Kampala, Richie Rugaya and his colleagues are busy showing off their coffee-making skills. It might seem commonplace enough to watch someone making a latte, but not here.

“You can count the number of espresso machines in Uganda on your hands,” laughs Rugaya. Coffee is something of a sacred crop in this landlocked country but only about 4 per cent of Ugandans drink it, with most preferring tea, a legacy of having the English as rulers from 1894 to 1962.

Uganda is among the largest coffee growers in the world but that’s not something most people outside this country are aware of. While it does produce some great beans, it typically exports poor quality robusta that usually ends up as instant coffee.

Plans are afoot to change this, with some local entrepreneurs looking to cash in on the global demand for good-quality coffee by producing better arabica and robusta beans. And, instead of just shipping the beans abroad, there are plans to ensure they are roasted and bagged locally so that more jobs can be created, and profits remain at home.

“We want to move from commodity to speciality,” says Rugaya, founder and chief executive of Gorilla Highlands (GoHigh) Coffee. “Roasting has typically been done in Europe due to an assumption that we didn’t have the right skills or hygiene levels, but we’re trying to change this. Because if roasting is done in Uganda, then 90 per cent of the money stays with the community in which the beans are grown.”

The social enterprise is headquartered in Kisoro, a western town near the Virunga Mountains and close to the borders of both Rwanda and the Democractic Republic of Congo. While its primary focus is on protecting the silverback mountain gorillas that live close by, it is also working with more than 1,200 coffee farmers to produce better coffee both for consumption at home and abroad.

“Ugandan coffee isn’t really that well-known despite us being the number two grower in Africa behind Ethiopia, and the eighth-biggest exporter in the world. We’re looking to change this while also doing what we can to conserve the gorilla population and make sure farmers have other sources of income,” said Rugaba.

“Women constitute 80 per cent of our farmers and so encouraging them to wait and pick beans at the right time benefits whole families. By not rushing to pick beans too early, they can earn double their money,” says Rugaya, showing us around the GoHigh roastery, which is based at the Makerere University Agricultural Research Institute, near Gayaza.

The company is being helped in its efforts by the government. It is seeking to raise the quality of production across the country by pushing through a national coffee Bill, which is proving somewhat contentious.

As coffee is a seasonal crop, GoHigh is also teaching farmers other skills to help them supplement their income and has recently set up the House of Bwindi fashion label under which it plans to sell clothes produced by farmers.

Having recently visited Ireland and attended the National Ploughing Championships as part of a trade delegation led by Ugandan minister for trade Amelia Kyambadde, Rugaya is keen to explore business opportunities here. The company is in talks over a partnership with Moyee Coffee Ireland, a startup that has helped establish roasteries in Ethiopia and is developing a blockchain-based fair-trade solution.

Coffee is just one of the areas in which entrepreneurs in Uganda are looking to take control of their own destiny and to give a hand up to others. While Ireland might seem an unlikely partner in helping Ugandans finesse their entrepreneurial spirit in areas such as coffee production, it is playing a key role in helping to pass on business expertise and foster strong trade links.

Trade between the two countries stands at about €24 million a year. There are hopes in both countries that this will increase in the coming years.

The landlocked country has a population of about 45 million people and has been one of Africa’s most stable economies in recent years. The government is projecting 6.2 per cent economic growth in the next financial year.

Proudly Made In Africa, a Dublin-based not-for-profit organisation that acts as a trade facilitator between African producers and European retailers, introduced Moyee to GoHigh. It has also helped bring together the Portlaoise-based mens’ grooming brand Machado and a shea-butter producer in Kampala.

Entrepreneur Síle Headen is now importing shea butter direct from Dorah Egunyu’s The Shea House after coming across the product at the ploughing championships.

Egunyu, whose business has been in operation for four years, and which also exports to Poland and South Africa, set up the company after turning to shea butter for treat her daughter’s eczema. The product comes direct from trees in northern Uganda and, as with GoHigh’s coffee beans, most of those producing the shea butter are women farmers.

“We’re looking to expand and buy our own land to plant trees at some point so we can help sustain our production. The more we export, the more we can support the local community,” she says.

About 3½ hours from Kampala is the Kirandongo district. This is where Irish international development charity Self-Help Africa is involved in a World Food Programme-backed initiative to support 8,500 small-scale farmers to diversify their production – away from maize and into crops such as cassava beans and sorghum. The programme is also teaching a range of other skills – everything from tailoring and animal husbandry to financial management.

“We’re trying to help people move to other activities so that they aren’t just relying solely on an income from agriculture,” says Viola Sunday Alumo, a project officer with Self-Help Africa.

The vast majority of those undergoing training are women and many are refugees who have fled violence in neighbouring South Sudan and the Democratic Republic of Congo. There are also a significant number who have escaped the Lord’s Resistance Army (LRA), the Joseph Kony-led guerrilla group that formerly operated in Uganda.

“We can’t train the whole community but, by training some of them, the knowledge they gain gets passed on so everyone benefits,” adds Alumo.

Down a dirt road close to the town of Bweyale is Kichwabugingo parish, where mother-of-two Josephine Awilli, who has undergone the training, lives in a small hut. An orphan, Awilli was unfairly sacked from her job a few years ago because she didn’t have the correct qualifications. She cries as she speaks about the situation she found herself in as a result.

“I did not know what to do. But I said I cannot just sit here – I must rise up and do something,” she says.

Access to a small loan and training in animal husbandry allowed Awilli to start rearing chickens, which she proudly shows off to visitors. In a matter of months, she has gone from having 150 birds to 300 and has plans to expand further.

“This is just the beginning. I hope to go further and I would like to be a role model for others in the community in which I live. I want to be Josephine the entrepreneur and be able to employ other people. This is also not the only thing I want to do – I would like to open a stationery shop.

“I feel confident now in a way I couldn’t have imagined and have a determination to do so much more,” she says.

In nearby Kololo village, Sophie Ayenyo, who heads a co-op that has nearly 1,800 members, is full of praise for the training.

“Here in this area, the families depend on the women. When they cultivate the crops, there is then a big challenge because the men take the lead in selling the products and then most of the money is kept by them. Training the women to have their own business allows them to keep their money so they are able to pay school fees and hospital bills,” she says.

“It also gives them freedom from domestic violence because there is more money available. Men were not very accepting of things first of all but now they leave their women alone because it is good for the whole family,” Ayenyo adds.

The honorary consul of Uganda to Ireland, Sylvia Gavigan, who is in the final stages of a PhD on female entrepreneurs in rural parts of Uganda at Technological University Dublin, has studied the impact of the training and has found it has had an overwhelmingly positive impact on the local community.

Not everyone is happy with the advice they’ve received. Martina Owon and other villagers in Mutanda B are upset at the falling price of chia seeds. Villagers were encouraged to grow the crop as an alternative to maize and, in the first season, received 4,500 Ugandan shillings (€1.10) per kilo, but this has since halved, leaving the farmers with a crop they can now only sell at a loss.

“We did very well at first and felt proud because we made money. The training was okay but, when you train someone and there is no market, then what can the farmer do?”

As the villagers are finding out, entrepreneurship doesn’t always end up in guaranteed business success every time, but it can offer a possible pathway out of poverty.

This article was supported by the Simon Cumbers Media Fund, with the assistance of Vikki Brennan of PMIA (Proudly Made in Africa), Barbra Barugi of Product of Africa, and Honorary Counsul of Uganda to Ireland, Sylvia Gavigan

1 Covid-19 has shown that much of ‘normal’ life should have been binned years ago
2 Johnny Ronan loses out in court battle on 13-storey docklands plan
3 ‘Lockdown lobby’ needs to explain why this time would be different
4 Pfizer to seek FDA approval for Covid-19 vaccine in November
5 New hotel planned for Dublin’s Liberties
6 Looking to postpone your tax payment? Revenue sets December deadline
7 Irish retailers are not hotbeds of Covid-19 infection, figures suggest
8 Number of houses for sale falls to 14-year low
9 Irish regulator probes Facebook's handling of children's data on Instagram
10 Budget 2021: fuel prices rise and high-emission cars hit
Real news has value SUBSCRIBE