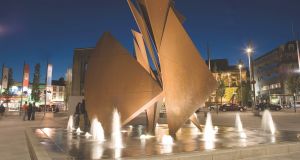 Galway is the “most efficient” Irish city in which to start a business, according to a study by the World Bank. It also outperforms its peers when it comes to registering a property, with the report noting “Galway excels both in efficiency and quality of land administration”.

However, the World Bank’s Doing Business in the European Union 2020 report suggests the western city lags others in getting electricity and enforcing contracts.

The report assessed the performance of the State’s five main cities under several key business headings: starting a business; dealing with construction permits; getting electricity; registering property; and enforcing contracts.

Collectively the Irish cities are among the best in the EU when it comes to starting a business and dealing with construction permits. But they fall behind their EU counterparts in terms of getting a property registered or enforcing contracts.

Despite the Republic’s centralised legal framework, the report said there were also disparities in regulatory performance between the five cities.

It found average time to deal with construction permits varies from about five months in Waterford to almost seven months in Cork while the cost varies from 1.1 per cent of the warehouse value in Galway to almost four times as much in Dublin.

“There are variations in the time it takes to conduct pre-planning meetings and obtain fire safety and disability access certificates with local planning departments, as well as the time to obtain utility connections,” the report said, noting the differences in cost are driven mainly by the development contribution fee, which is set independently by each city council.

Cork, by far, is the city that most quickly enforces contracts, and ranks high in terms getting businesses efficient electricity connections and reliable electricity supply quickly, it said.

The report said Dublin, despite being the city with the heaviest workload across all areas, performs well on three indicators: getting electricity, starting a business and enforcing contracts.

Waterford, while ranking lower on most indicators, outperforms the others when it comes to dealing with construction permits, “which are inexpensive and can be obtained quickly in the city”, it said.

The five Irish cities underperform their EU counterparts when it comes to getting a contract enforced with the high cost of litigation and length of legal processes cited as key stumbling blocks.

Legal costs are highest in the capital and in southern Ireland and least expensive in Western Ireland, the report said.

Resolving the commercial disputes takes an average of 22 months across the five locations measured, which is nearly a month longer than the EU’s average, the report said.

“Ireland has consistently been among the top performers globally on the ease of doing business, but this first study, which looks at regulatory performance in five cities, identifies areas where the country can do better for local firms, to provide more opportunities not only for their domestic growth but to help them compete in the global economy,” said Jakob Kopperud, World Bank Special Representative to the UK and Ireland.