Planet Business: Downgrades all round 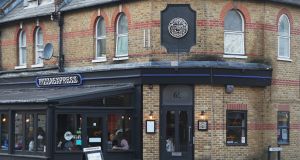 Pizza Express in Woking, which Prince Andrew said he visited in March 2001. The chain is saddled with high debts and is expected to restructure. Photograph: Andrew Matthews / PA

Image of the week: Pizza debt

What a time the Pizza Express chain (known here as Milano) is having. Last month, the company hired advisers to help it escape from under the weight of its debt mountain. Then, on Saturday night, Prince Andrew told the BBC’s Newsnight that he couldn’t have been in a London nightclub, where he is accused of sleeping with a 17-year-old on the 2001 night in question, as he was in Pizza Express in Woking, Surrey, pictured here in all its innocuous glory.

A flood of jokey online reviews about the branch’s “royal” service then followed, but alas the outbreak of interest was not enough to prevent Moody’s downgrading Pizza Express’s debt in the sober light of Monday, saying a restructuring of the debt was “highly likely” and going on to muse about weak consumer sentiment coupled with “signs of overexpansion” by other casual dining chains, none of which, to be fair, have dough balls.

In numbers: OK what now?

5 Number of hopeful trademark applications that have been made to the US Patent and Trademark Office for the dismissive online retort “OK Boomer”. They include one from Fox Media, which fancies making a reality, comedy or game show television series with that title.

25 Age of the New Zealand Green Party politician Chloe Swarbrick, who dropped the phrase “OK Boomer” during a parliamentary debate earlier this month after she was interrupted by rival Todd Muller (who at age 50 is technically too young to be a Baby Boomer, but never mind).

1.5 billion Number of times the Chinese-owned TikTok app, where the “OK Boomer” phrase began, has been downloaded from Apple’s App Store or Google Play. Facebook-owned Instagram is already figuring out how to copy its three-year-old competitor’s most attractive features.

Getting to know: Tim Warrillow

As the co-founder of Fever-Tree Drinks alongside the splendidly named Charles Rolls, British businessman Tim Warrillow is one of the biggest beneficiaries of the gin revival. Together, the two men are the “tonic tycoons”, according to the Daily Mail. That’s because Fever-Tree, the maker of such eclectic mixers as Refreshingly Light Cucumber Tonic Water and the classic Elderflower Tonic Water, has been coining it throughout this decade – much to the dismay of Schweppes owner Coca-Cola – and Warrillow, who is the company’s chief executive, saw his pay packet swell handsomely to almost £4 million (€4.7 million) last year.

This week, however, the purveyors of Madagascan Cola and any number of ginger ales said a UK retail slump was weighing on its sales and will hold back its previously fizzy growth. This sent Fever-Tree’s shares down 8 per cent, but the stock soon started surging ahead once more.*

*This article was edited on Nov 22nd to correct Fever-Tree’s share price path.