Debt management agency says it has already raised €18.5bn of its increased €20bn to €24bn borrowing target for this year 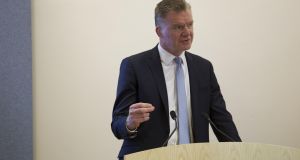 NTMA chief executive Conor O’Kelly. He said from a borrowing perspective he was not worried about the next four years .“It is the decade after that we need to keep an eye on and begin to plan for.” Photograph: Sara Freund

Increased borrowing as a result of the pandemic has left the State exposed to rising interest rates, the National Treasury Management Agency (NTMA) has warned.

NTMA chief executive Conor O’Kelly said that from a borrowing perspective he was not worried about the next four years .“It is the decade after that we need to keep an eye on and begin to plan for.”

Publishing its annual report, the State’s debt management agency said its 2020 borrowing programme had already raised €18.5 billion, 84 per cent of its increased €20 billion to €24 billion borrowing target for the year.

The NTMA had originally planned to borrow €10 billion to €14 billion in 2020, but increased spending on health and job supports due to Covid-19 prompted a different public sector borrowing requirement.

While interest rates remain low, the State’s high debt is manageable and additional borrowing is cheap, but Mr O’Kelly warned this may not always be the case.

“Ireland is well placed to tackle this unprecedented shock from a position of strength thanks to the significant improvements in our fiscal position over the last five years; the elimination of our debt chimneys; and a range of upgrades by ratings agencies that have recognised the extent of the progress Ireland has made,” he said.

“While addressing Covid-19 is today’s urgent priority, Ireland should prepare for dealing with a higher debt burden and the risks that this entails. It’s possible the tailwinds that exist today will be replaced with headwinds in the future.”

Mr O’Kelly said the additional debt being taken on to deal with the pandemic was raised at an average yield of less than 0.3 per cent and an average maturity of 11 years.

The agency raised €6 billion in an auction of 10-year bonds last week, which attracted a record level of demand from investors, a reflection of the Republic’s renewed financial standing.

Mr O’Kelly said the State was currently borrowing at 30 basis points similar to other “semi-core” euro zone countries. During the last crisis it was rated in the peripheral category “and countries in that category are now borrowing at five times that rate. “The prize for being rated as a semi-core country is very significant.”

He said in the past five years the State’s interest bill has fallen from €7.5 billion to €4 billion a year, “saving us over €3.5 billion annually” .

Also attending was Minister for Finance Paschal Donohoe, who said it was a “deliberate choice...to be very sparing about figures in relation to costs and commitments” in the programme for government published by Fine Gael, Fianna Fáil and the Green Party.

“We are not laying down many commitments in relation to additional funding, and we have done that deliberately. While I remain optimistic about how our country can recover, I’m optimistic but I’m realistic about where we stand as well.

“The reason we haven’t put figures against the planned recovery fund is that we need to see how our economy develops over 2020.”

Mr Donohoe said the plan was to publish a national economic plan some time between now and the budget in October, laying out the new government’s strategy for recovery in the medium term.

Asked if he expected to keep the finance portfolio in the next government, Mr Donohoe said that question was “above” his current pay grade.

Mr O’Kelly also provided an update on the Pandemic Stabilisation and Recovery Fund, announced by the Government in May.

The fund has the capacity to deploy up to €2 billion from the existing Ireland Strategic Investment Fund, investing on a commercial basis in businesses to help them through the current crisis.

Mr O’Kelly said the fund was engaging with about 30 companies, many of which were “critical employers” in the Irish economy concentrated in the worst-hit sectors such as transport, hospitality, tourism and retail sectors.

He also said it was “reassuring” that the agency had not seen many companies looking for emergency capital, and that those which were had received it from third-party sources.

1 In this strangest of recessions, what happens next for Ireland?
2 Should I switch bank now with Ulster Bank at risk of closing?
3 Ireland’s Covid-19 economy in five graphs
4 Estée Lauder staff at Dublin airport plan further strike action
5 Michael O’Leary is the boss you want to lead an airline out of crisis
6 Overhaul of lease arbitration regime would be a game changer for retailers
7 Online shopping makes town centre jobs unviable, says Next boss
8 Best Covid-19 ‘influencers’ will avoid hectoring
9 Bank of Ireland sees about 2,000 staff apply for voluntary redundancy
10 Fortnite owner signs multimillion deal to buy Irish ‘kidtech’ firm
Real news has value SUBSCRIBE