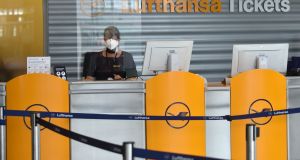 The exceptional decline in the EU economy has made it necessary to relax the rules, with Lufthansa accessing €9 billion in state aid. Photograph: Christof Stache/AFP

Government action across the EU has done much to insulate households from the worst effects of the economic collapse. Major support has also been given to the business sector to help it weather the crisis. However, designing appropriate supports for business is not easy, and further refinement of measures is needed in Ireland and elsewhere.

Across the EU, different approaches have been taken to business support, reflecting differences in economic structure.

In the case of Ireland, we have few large Irish-owned companies and, except for aviation, the large Irish corporations are not particularly vulnerable. Thus, for Ireland, support for small and medium-sized enterprises (SMEs) is the priority.

An important consideration in supporting SMEs in Ireland is that they operate in competitive markets. Provided that aid is given on a fair and transparent basis, it will not interfere with a recovery in the market, nor with future competition. There is little danger that the Government will favour some restaurants over others.

Germany and France are rather different, as big companies are more dominant in their economies and quite a number of them are suffering badly from the crisis.

As a result, the response of the German government has been to channel a very large amount of assistance to some of these big companies. By May, this German state aid accounted for half of all such support in the EU and most of the rest of this aid to big companies was in France and Italy.

The German airline Lufthansa operates in a competitive airline market in the EU. Competition in this market has been fostered over decades by EU rules, to the benefit of all travellers. Under previous rules, state aid to Lufthansa would not have been necessary or permitted. However, the exceptional decline in the EU economy has made it necessary to relax the rules, with Lufthansa accessing €9 billion in state aid. The concern is that this relaxation is done on an ad hoc basis and that this could distort the market in the long term, adversely affecting consumers.

Other large companies that have recently received state aid include Air France and Renault in France. Even if this bout of state aid is in the long-term interest of the EU, there is a danger the previously level playing field for business could be distorted by favouring companies from countries that can afford more generous state aid.

This would have long-term costs for all consumers, and possibly also for companies in less “generous” countries. Hence Ryanair’s protests about the aid to other airlines. While Michael O’Leary has a point here, there is a risk that as he cries wolf so often, his complaints about this could be dismissed as just special pleading.

There is a genuine problem today for many large firms: ones that would have had a future, and should still have a future, could be put out of business by the extreme nature of the lockdown restrictions. Creating replacement companies as the economy recovers would be slow and costly. For this reason, the European Commission has temporarily relaxed the rules on state aid. It remains to be seen whether they manage the relaxation in a way that does not permanently damage competition.

When Ireland bailed out some of its lenders in September 2008 through the bank guarantee, the then UK chancellor Alistair Darling expressed his annoyance that those financial institutions would provide unfair competition to UK banks. Little did he know what an albatross Ireland was hanging around its neck. While it was necessary to ensure Ireland’s economy had a functioning banking system, the bank rescue came at quite a cost to the Irish taxpayer.

Europe has now developed a common framework for dealing with the threat of failing banks, which ensures a more level playing field. Major euro zone banks are now directly regulated by the European Central Bank in Frankfurt.

The EU needs to develop a common framework for provision of necessary state aid to systemically important companies in times of crisis. Key principles are to ensure any state aid is fair, does not distort competition, and maintains a level playing field between companies based in different member states. Permitted state aid in these circumstances should not be governed by national governments’ financial strength nor by a desire to favour their national champions.

For Ireland, with few large systemically important companies, this may not seem important. But ultimately consumers will lose out if the preservation of key businesses in times of crisis is done in a way that allows them undermine competitors.