The State has just borrowed €6bn of breathing room

Cliff Taylor: NTMA can pick and choose when to seek more money with plenty of cash in hand 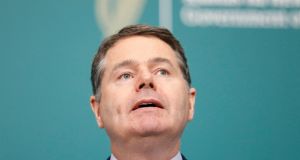 Minister for Finance Paschal Donohoe: For investors issues such as Brexit-risk could be a factor as they look at the Republic.

The raising of another €6 billion in borrowings on the markets by the National Treasury Management Agency (NTMA) gives some breathing room for the State finances heading into the second half of the year. The NTMA can pick and choose its time to raise more money – and the annual repayments on its latest borrowings is just €17 million.

The exchequer’s need for cash has exploded because of the Covid-19 crisis. The NTMA has now raised €18.5 billion this year from borrowings and has substantial cash balances to hand. It will certainly want to raise more cash as the year goes on – possibly another €8 billion-€10 billion – but is now in a position to pick and choose its timing.

The interest rates of 0.285 per cent on the latest borrowings was a bit above other recent issues, but because interest rates are so low in absolute terms it doesn’t really matter. The annual interest bill on the money raised on Tuesday will be just €17.1 million, an inconsequential sum in the exchequer arithmetic.

What is important, of course, is that the money must be repaid in 10 years’ time – effectively refinanced through new borrowings. Managing how repayments fall in the future is an important job for the NTMA.

The bond issue on Tuesday was a big transaction for the Republic and was met with significant demand, with €66 billion of offers from 400 different investors.

There is always a bit of a game with these issues as investors know they will only get a fraction of what they bid for. Still, the scale of the demand was a record. The NTMA will hope the bond price remains firm in the next few days – thus encouraging investors to come back for more when Irish debt is again on offer.

The gradual move of the exchequer into surplus and the strong position of the economy heading into the crisis has helped to hold down the cost of borrowing. And a vital factor, of course, has been the presence of the European Central Bank in the market. Its bond-buying programme of recent years has helped to hold down borrowing rates on the market and assisted the NTMA in cutting the servicing cost on Irish debt .

The ECB has now stepped this up via a special pandemic bond-buying programme under which it has already bought €3 billion of Irish debt this year. Davy stockbrokers calculates that it might buy another €10 billion over the rest of the year. Knowing there is a buyer in the market is of obvious encouragement to investors.

The ECB last week committed to continue its pandemic programme until the middle of next year at least – and possibly longer. It has also promised not to pull the rug out from under the market immediately afterwards – it will reinvest its earnings back into the market for a period.

This doesn’t guarantee that we will be able to raise borrowings at quite so low a rate for the rest of 2020 and into 2021, when massive borrowings from governments all over the world will come to the market, with unpredictable implications for interest rates. Investors will also be looking at how different economies evolve – issues such as Brexit-risk could be factors as they look at the Republic.

But ECB support in the market is a vital prop and should keep borrowing costs generally low over the next year. Given the amount we need to borrow, this is just as well. As the ECB then winds down its support, probably in the latter half of next year, it will be important the the amount we need to borrow is also on the decline from the high crisis levels we are now seeing.