Data are a tale of two economies: the domestic takes a huge hit while exports grow 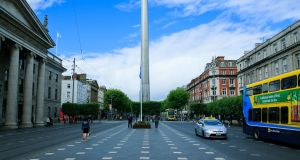 Irish national accounts data have always been tricky to assess, but with the latest quarter covering a period before and after the pandemic hit, the latest figures show particularly divergent trends.

The headline figure showing a 4.6 per cent year on year rise in GDP reflects the ongoing strength of the export sector, but is not a good guide to where the economy is now, with a massive collapse underway in the second quarter.

The start of the collapse in the domestic economy is evident , as is the continued growth in exports driven by sectors like pharmaceuticals.

As the year goes on, this divergence between the two parts of the economy may well widen.

What do the figures tell us? With the sector including distribution, transport , hotels and restaurants down 9 per cent year on year, the signs of the Covid-19 shutdown are clearly evident, even though the closure came towards the end of the period.

Consumer spending in the January-March period was down 4.7 per cent on the previous quarter and the Central Statistics Office figure for modified domestic demand, which excludes big investment moves caused by aircraft leasing and intellectual property movements, were down 1.6 per cent.

All these domestic indicators can be expected to worsen in the second quarter as the full horrors of the shutdown in the consumer facing parts of the economy show through.

That said, much of industry never closed , and nor did the digital services sector – and the latest exchequer returns suggest that employment and earnings here may be providing some support to income tax receipts,

The export sector remained strong through the first quarter. In sector like pharma this should continue, though exports markets for some other sectors could become more challenging. Industrial output, dominated by multinationals, was up 22 per cent year on year and output from the ICT sector was up 10 per cent.

This is what drove an annual rise in GDP of 4.6 percent. In a comment on the figures, Dermot O’Leary, chief economist at Goodbody , said that the contrast between the international and domestic sectors was striking.

With Ireland being a location for industries that are perceived to be the relative “winners” in this pandemic (ICT, pharma), this “two-speed” economy will continue to be a feature,” he said.

The particular nature of the Irish economy suggests that this contrast between the international and domestic elements may well continue.

The domestic sector is clearly in deep trouble, but exporting industry may provide some support to economic activity, employment and tax revenues as the year goes on.

The other notable aspect of the figures is the continued movement to Ireland of intellectual property by major multinationals. This follows international rule changes discouraging the placing of these assets – which typically include the patents, royalties and copyrights of major US firms for international sales – in tax havens like Bermuda and the Cayman Island.

This has led to a major movement of these assets to Ireland – they do not directly boost employment but they do appear to be a factor in boosting corporate tax revenues, despite the ability of firms to use capital allowances to shelter the bulk of the resulting profits from tax.

While the exact reasons for the surge in corporation tax shown in the latest exchequer figures are not clear, it is a fair bet that much of it is related to this trend, either directly or indirectly.

While there have been warnings that corporation tax could fall fall at some stage causing problems for the exchequer, higher receipts this year would be welcome with other revenues hit hard by the shutdown.