Battle for pay increases set to take centre stage in 2020

With exchequer revenue €3.5bn higher than a year ago, Paschal Donohoe will do well to see off higher public sector pay claims 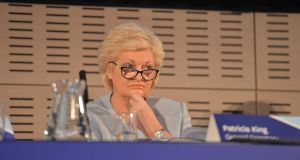 Patricia King: she has urging unions dealing with private sector employers to seek pay increases of between 3.5% and 4.5% next year. Photograph: Alan Betson

The ICTU this week laid out its stall on pay, with general secretary Patricia King urging unions dealing with private sector employers to seek increases of between 3.5 per cent and 4.5 per cent next year.

This is a multiple of the 1 per cent inflation figure forecast by most commentators for next year, Brexit or no Brexit.

And it is well ahead of the 2 per cent rise pencilled in for public servants from October next (those earning up to €32,000 will benefit from an extra 0.5 per cent rise on January 1st).

Danny McCoy, chief executive of employers’ group Ibec, said the increase being sought looks “too high”. He argues that it should reflect productivity growth, which runs at between 2 per cent and 2.5 per cent.

Employers would argue that this is not the time to pump up wages when employers are faced with the threats of Brexit, Trump’s tariff wars, a German economy on the edge of recession and the small matter of a general election here some time in the next six months.

Yet, data from the CSO would suggest that private sector workers are already receiving pay increases of the level suggested by King. According to the CSO, there was an year-on-year increase in average weekly earnings in the private sector of 3.9 per cent to €708.24 in the third quarter.

This compared with a rise in the public sector (including semi-State entities) of 1.3 per cent. However, public servants are paid more on average, with the figure rising to €972.45 in the third quarter. They also have better pension provision on average than their private sector counterparts.

In spite of this, we can expect public sector unions to make a play for higher increases next year. With exchequer revenue €3.5 billion higher than a year ago, Minister for Finance Paschal Donohoe will do well to see off these claims.

Especially as the Government caved in to nurses, demands earlier this year at a cost to the exchequer of about €48 million.