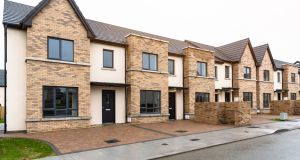 The housing market is in difficulty. More expensive properties are slow to sell and prices in some areas are static or easing back. File photograph: Getty

The Central Bank’s decision to maintain mortgage lending limits will keep people in a “rental trap” at a time when those home-lease costs are running at a record high, according to consumer activists and financial advisers.

Gabriel Makhlouf, the new governor of the bank, resisted calls from politicians and bankers to loosen lending caps by announcing on Wednesday they will remain unchanged, amid signs households are increasingly borrowing to the maximum allowed as house price growth outpaces that of incomes.

The bank estimates that house prices would have been 26 per cent higher in March – above Celtic Tiger levels – had the rules not been introduced in 2015.

“The mortgage measures are working and because they’re working we don’t propose any changes to them,” said Mr Makhlouf, who took over as governor in September. “I want to be very clear that they are a permanent feature of the Irish market; the rules are not going away.”

The bank considered tweaking the rules, which limit most new mortgages to 3½ times borrowers’ gross income, and also to cap loans as a proportion of property values. But “we have not found a way that is more flexible than the existing regime while at the same time meeting the objectives of the measures”, he added.

Rachel McGovern, a director at Brokers Ireland which represents financial brokers, said the bank’s decision was “disappointing” and will keep would-be homebuyers in rented accommodation, fuelling cost inflation in this area.

“The gap between repaying a mortgage and paying rent for a similar property is severe. It is substantially more expensive to rent in almost every area of the country,” she said.

Rent prices around the country rose by an average 5.2 per cent to a record €1,403 in the year to September, according to property website Daft.ie.

Dermott Jewell of the Consumers’ Association of Ireland said many young people paying “exorbitant” rents will “never get on the property ladder unless they have significant input from their parents”.

The failure to adapt the rules would be seen as a mistake in the longer term “when home ownership rates plunge further. When the home buying aspirations of many will have long vanished and they will be at the mercy of rental levels set by largely overseas institutional investors,” said Pat Davitt, chief executive of the Institute of Professional Auctioneers & Valuers.

Overall, house and apartment prices have increased by 85 per cent from their low point in 2013, but they remain almost 17 per cent below their highest level in 2007, before the property crash.

Taoiseach Leo Varadkar said in July that renters should be given some leeway to build up deposits, while AIB chief executive Colin Hunt said in October that the rules had served their purpose and should be eased.

While the bank said it is not an objective of the mortgage rules to target house prices, its analysis suggests that affordability pressures for borrowers would have been “more acute” had they not been in place.

“It’s true the rules are becoming a more binding constraint on borrowers, but there would be little point in them if they did not hold back house price inflation as affordability became stretched,” said Conall MacCoille, an economist with stockbroking firm Davy.

A spokesman for Banking & Payments Federation Ireland said: “BPFI recognises the importance of the Central Bank mortgage market measures in ensuring the stability of the banking systems and protecting borrowers from the risk of overindebtedness.”