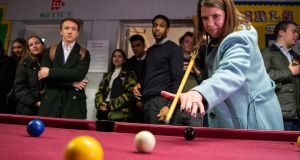 Image of the week: Election balls

This time next week, it will very nearly all be over, bar either the jostling over coalition negotiations or the angling for cabinet positions. In a downbeat winter campaign to see which lucky party is charged with “getting Brexit done”, the strictly anti-Brexit Liberal Democrat leader Jo Swinson takes the opportunity to pot an appropriately yellow pool ball during a visit to a London youth centre. Meanwhile, outside the building an Extinction Rebellion activist dressed as a bee glued himself to the Lib Dem’s ironically electric election battlebus and smeared ketchup on the windscreen as part of a protest called Bee-yond Politics. Still, there have been messier mornings on the campaign trail.

Sterling touched its highest level against the euro in this number of months earlier this week, as currency traders bet on a Brexit-facilitating majority for Boris Johnson’s Conservatives.

A Labour-led government would likely lead to a second referendum, “to which we would apply a 60/40 probability of a vote to remain”, said RBC Capital Markets’ chief currency strategist. Alas, RBC places the chance of a Tory majority at 60 per cent.

The Conservatives would need a “solid” majority of this many seats or more in order for sterling’s rally to continue, said Credit Suisse.

Getting to know: John Foley

US “boutique fitness” lover John Foley is the chief executive of exercise company Peloton, which went public in September and has now wrapped up the year by going viral. The internet is so unimpressed by an ad showing a man giving his thin yet anxious female partner a Peloton exercise bike for Christmas that a new golden rule of present-giving has been firmly established: exercise bikes are not friendly gifts. Foley, the co-founder of the company – which thoughtfully sells subscriptions to on-demand spin classes as well as the $2,000 touchscreen bikes – says he pitched Peloton to angel investors three times a day for four years. And now, give or take the odd share price wobble, the Harvard Business School graduate leads a company with a valuation of $9 billion that, to be fair, not everybody hates.

Body language between French president Emmanuel Macron and his US counterpart Donald Trump wasn’t the best ahead of the Nato summit in London this week. Alongside a difference of opinion on Turkey’s action in Syria, trade tensions have been simmering between the two, after the Trump administration responded to a new French digital services tax by threatening new tariffs on these French goods:

1. Champagne. The sparkling wine could be subject to a 100 per cent tariff, which is bad news for just about everybody.

3. Make-up. “Preparations” for lips, eyes, nails, beauty or make-up powders, sunscreen and soap could all be slapped with extra levies.

4. Handbags. About 10 categories of handbag, “with or without shoulder strap or without handle”, were specified, much to the dismay of French luxury goods groups.

5. Porcelain. Household items made of porcelain, china and other materials as fragile as some of the egos involved in this business have been caught up in the great global desire to extract some tax from Google, Amazon and Facebook.