In Paris to receive a business award, Tony Smurfit talks about sustainable packaging, Brexit and France 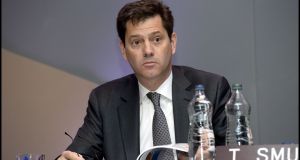 When Tony Smurfit accepted the France Ireland Chamber of Commerce award for Best Irish Company in France on Thursday night, he was in a sense coming home.

Smurfit served as chief executive of Smurfit France from 1995 until 2000. In the intervening years, his father, Michael Smurfit, retired, the Jefferson Smurfit Group merged with Netherlands-based Kappa Packaging, and Tony Smurfit became its CEO.

The company founded by Smurfit’s grandfather, Jefferson, in 1938 has become a global leader in cardboard packaging, with 46,000 employees at 350 production sites in 35 countries, and turnover of €8.9 billion last year.

“We have a vision for our company, which is to be globally admired,” Smurfit says.

Smurfit Kappa’s Better Planet Packaging initiative, which seeks to reduce packaging waste and keep it out of landfill and oceans, is one of his favourite topics.

“On world clean-up day in September, we had 8,000 employees and their families picking up litter for a morning across the world. It was a great success. I did it with two of my daughters.”

The day before our interview, Smurfit Kappa observed its fourth annual Better Planet Packaging day. More than 700 customers went to the company’s 26 centres around the world.

“These experience centres, as we call them, are like intense innovation centres for our customers to use. We started in Russia at eight o’clock in the morning, and we finished off in Mexico, starting at eight o’clock their time as well.”

The experience centres “are also collection points for big data”, Smurfit continues. In Saint Mandé, just east of Paris, the company uses eye trackers to assess a customer’s reaction to packaging on grocery shelves. Smurfit Kappa then uses the data to advise clients.

Smurfit Kappa has benefited from growing public engagement with environmental causes, and Smurfit believes green parties will continue to succeed in politics. “Our product is sustainable, recyclable, renewable and biodegradable,” he says. “If you throw a cardboard box in the ocean, it just disintegrates back into natural fibres. It’s gone in a week.”

The company’s website notes that paper biodegrades faster than leaves. It vaunts the “circularity” of its enterprise. “We collect packaging and re-use more than 90 per cent of this material in our closed-loop business model.”

Smurfit predicts that “the next generation will refuse to accept products that are packaged unsustainably, or overpackaged products, which are just as bad. It doesn’t make sense to deliver small items in huge boxes.”

Internet shopping has increased exponentially. In France, for example, ecommerce has grown from €20 billion to €100 billion in a decade.

Though ecommerce “has been a huge area of growth for us”, Smurfit Kappa is trying to reduce the volume of packaging. “There’s a lot of inefficient packaging going on, which needs to change,” he says. “Companies come to us to try and design that change. We help them reduce their packaging, to make sure they package fit for purpose.”

At present, 6 per cent of fossil-fuel consumption goes into the manufacture of plastic. That is projected to rise to 20 per cent by 2050, according to the International Energy Agency. About a quarter of all packaging is plastic, but only 14 per cent of plastic packaging is collected for recycling.

By comparison, Smurfit says: “Eighty-seven per cent of all boxes are recycled. And those that are not recycled, if they happen to end up in the waste stream, degrade.”

On November 21st, Smurfit Kappa introduced three new products for bundling canned and bottled beverages, the GreenClip, TopClip and Nor-Grip Case Study. They are alternatives to plastic rings used to hold six-packs, which have been shown to choke marine life, and to the stretch plastic film used to hold cans or bottles together.

“Plastic is part of our lives. We will never get rid of it all,” Smurfit says. “We can’t do everything, but there are many, many applications where we can engineer out of plastics products. Sometimes it’s not about engineering out plastic completely. Sometimes it’s saying how can we use less plastic by using a box as stronger protection for a smaller amount of plastic inside ... even if the plastic industry did brilliantly in coming decades in getting a closed loop eco-system, they are still going to have leakage that ends up in somewhere, typically in the oceans, and that’s what we have to stop.”

Smurfit says Brexit has turned his brown hair grey. “It is just the biggest act of self harm that a nation has done in a long time. You still pray that it’s not going to happen. But I think the reality is, looking at the way the election is panning out, I’d say you will probably have a Conservative Party that will implement Boris Johnson’s plan.

“This is just the end of the beginning. They’ll have to renegotiate trade deals, bilaterals on all different subjects. They haven’t even started and yet this withdrawal agreement is there, and they think they’ll have accomplished everything.”

Even if parliament passes the agreement that Johnson concluded with the EU, and Brexit occurs by January 31st next, Smurfit does not see how a trade agreement can be concluded by the end of the 2020 deadline. “That’s a very, very ambitious agenda that hasn’t been done before … if they don’t get a trade deal by December 31st, 2020, in theory they crash out ... unless they decide to extend the negotiations, which is probably the likely scenario because maybe they are not totally … they don’t want to commit suicide.”

Is Smurfit’s disquiet enough to make him hope that Jeremy Corbyn will win the general election and call a second referendum?  “No. I think that if the Labour Party had a candidate who was not as radical as Jeremy Corbyn, they would win the election. But given his stepping back to the 1950s and 1960s of Communism and Trotskyism and some of his people, I think the effect for business and the effect for the British people would be very, very poor.”

Does he mean Boris Johnson is the lesser of two evils? “It’s a Hobson’s choice, isn’t it?” Smurfit replies.

Smurfit Kappa has 5,500 employees and 54 facilities in France, where it has been present since 1990.

“The French economy is not doing well, but it’s doing better better than it has done for a while,” Smurfit says. “I think Macron has done a super job, notwithstanding the Gilets Jaunes.”

Smurfit applauds Macron’s plan to allow companies to raise wages for low-paid workers without additional social charges. “I thought that was a very clever programme. Our company participated in it, and other companies as well. If you put cash that people didn’t expect in their pockets, they tend to spend it … generally speaking, France has really stepped up under Macron to have a strong position in Europe which, given the position the UK has not taken in Europe following Brexit, is welcome.”

Smurfit believes tension between management and trade unions in France has diminished over the past two decades. But the country is bracing itself for a mass strike on December 5th, which could be open-ended.

“I hope not, because … France is moving in the right direction, from a business perspective. I get the fact that there are towns on the outskirts that are suffering. But that’s no different to practically every other country,” Smurfit says. “When you look at it from my perspective, we are seeing some growth. We are seeing a better market. We see a France led well. Doing that would be very counterproductive, if it’s a severe stoppage. Let’s hope it’s not.”

Germany has thrived in the euro zone, which made its exports more competitive. Smurfit argues that “it is really up to Germany to start investing in its own industry, businesses and country, so that it can start to pull Europe out of this slowdown”.

Does he really think Germany could pull Europe out of the slowdown, by investing? “I absolutely do,” Smurfit insists. “They have got, in company terms, a fantastic balance sheet. They can really do a lot if they are so minded.”

Referring to the economic slowdown, Smurfit says, “The job of a manager is not to look straight ahead. It’s to look around corners. I have to continue to see what could affect the company in a negative way and then adjust to it … success is never a straight line. There will always be bumps in the road … the most important thing is to be secure in your balance sheet, to make sure you have agility to adjust things if you have to, and to make sure that when you come out the other side of an economic slowdown, you are stronger and not weaker. We try to keep an eye on the bigger picture and go forward.”

1 Player Wills site: Hines and APG to seek permission for 416 homes
2 Eir agrees to buy entire share capital of Emerald Tower
3 Developer O’Flynn calls for task force to deal with housing crisis
4 Consumer spending fall may cut indirect tax revenues by up to €6.7bn
5 Pilita Clark: A lot of us are losing it in lockdown – but we really shouldn’t
6 ‘I’ve so many outgoings with family life . . . it puts manners on you’
7 Pricewatch: Coronavirus has given us four categories of shopper
8 Our warped sense of perspective bodes ill for Ireland's economy
9 State guarantee needed for businesses that require liquidity
10 A Smigin of language goes a long way for well-travelled Cork woman
Real news has value SUBSCRIBE