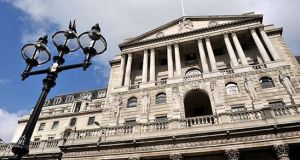 The Bank of England trimmed its expectations for second-quarter growth, predicting GDP will remain flat against a previous forecast for 0.2% expansion. Photograph: Getty Images

The Bank of England has kept interest rates on hold at 0.75 per cent amid heightened no-deal Brexit fears and as UK growth falters.

Policymakers on the bank’s nine-strong monetary policy committee (MPC) voted unanimously to keep rates unchanged as it cautioned the “downside risks” to growth had increased since its last set of forecasts in May.

The bank trimmed its expectations for second-quarter growth, predicting gross domestic product will remain flat against a previous forecast for 0.2 per cent expansion, after official data showed the economy shrank by a worse-than-feared 0.4 per cent in April.

But the bank reiterated that “gradual” and “limited” rate hikes would be needed over the next three years to keep inflation to its 2 per cent target.

It comes after key policymakers at the bank have been banging the drum recently for the need to raise rates soon.

In the minutes of the latest MPC meeting, the bank said: “Downside risks to growth have increased. Globally trade tensions have intensified. Domestically, the perceived likelihood of a no-deal Brexit has risen.”

It added that increased Brexit uncertainties had weighed further on sterling.

The bank said the stockbuilding boost that saw growth accelerate to 0.5 per cent in the first quarter ahead of the original March 29th Brexit deadline had begun to unwind in the second quarter, as predicted.

It said GDP data was “erratic” but overall suggested growth had weakened year-on-year in the first half.