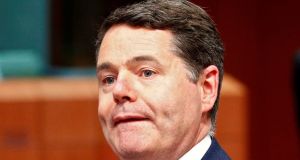 Minister for Finance Paschal Donohoe said earlier this week that the Government will have to make a judgment call ahead of budget day on the most likely Brexit scenario, even as it plans in the meantime for both

Vacant development sites should be taxed more aggressively and loopholes being used by landowners closed to cut the cost of building homes and spur supply, according to a senior economist at the Economic and Social Research Institute (ESRI).

In its latest quarterly economic commentary, it also says Brexit is already having a direct impact on the Republic’s economy as consumers are more cautious about spending than would normally be expected against the backdrop of an unemployment rate at its lowest rate since 2005 and rising wages.

Joe Brennan reports on the findings and assesses the unenviable position Paschal Donohoe finds himself, trying to frame the next budget ahead of the Brexit deadline.

Netflix has confirmed price increases for Irish subscribers from today, with monthly costs increasing by as much as 14.5 per cent. However, it stressed that its basic offering will remain unchanged at €7.99.

A former employee in the Office of Public Works will on Thursday tell a private session of the Public Accounts Committee that they highlighted alleged “serious shortcomings and failures” in the property management unit of the organisation.

Mark Paul reports that IBM has agreed a deal with US government authorities to pay almost $15 million (€13.4 million) to settle a case over the involvement of its Irish Cúram software unit in a troubled online medical platform for the State of Maryland.

Do you want your phone battery to last longer? In a highly significant breakthrough, scientists in Ireland have found an inexpensive way to make batteries more compact, scalable for industry, quicker to charge and with 250 per cent more energy density than any other battery on the market.

In her Net Results column, Karlin Lillington argues that libra is a warped hybrid that further consolidates Facebook’s already enormous power and is the strongest argument yet for dusting off US and EU antitrust powers.

Finally, Dick Ahlstrom writes on how Dublin’s RDS gives big tech a run for its money in the innovation stakes, and why it will be a fitting host to this year’s 10th anniversary of the Irish Times Innovation Awards later this year.