1,500 retailers to reopen, plans for take-offs, and dithering on climate change 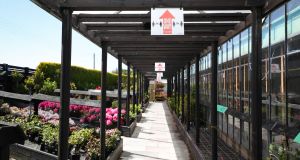 About 1,500 retailers will reopen their doors next Monday as the State moves to the first phase of its plan to reopen the economy

About 1,500 retailers will reopen their doors next Monday as the State moves to the first phase of its plan to reopen the economy. But it is proving a costly exercise for them. Peter Hamilton reports.

South Dublin County Council has agreed to sell 48 acres of land to a company that plans to build the State’s largest film and TV studios.

AIB chief executive Colin Hunt, who set out in March to cut 1,500 jobs by 2022 to help keep running costs in check, has signalled he may seek additional savings.

In his analysis of the bank’s latest trading update, Joe Brennan identifies a major hurdle that AIB must negotiate: it has €6.6 billion of loans out to business sectors hit directly or highly exposed to Covid-19.

Ryanair plans to restore 40 per cent of flight schedules from July 1st, including 139 routes from the Republic, the airline said yesterday. Barry O’Halloran explains what travellers can expect.

Irish airline owner Declan Ryan, son of Ryanair founder Tony Ryan, has added his voice to the chorus of industry executives who are opposed to leaving the middle seat on aircraft empty as a social distancing measure on flights, describing the idea as “nonsense”.

In his column this week, Eoin Burke-Kennedy writes that Governments dithered on Covid-19. Will it be the same on climate change?

Eoin also reports on how one of the world’s largest fund managers is taking its fight for greater action on climate change to the boardroom of US oil giant ExxonMobil.

Well-known developer and businessman Greg Kavanagh is being sued by his brother in the High Court over the latter’s alleged removal as a director of 19 companies.

Finally, in our commercial property coverage, Ronald Quinlan reports that legal firm Matheson has signed a new 12-year lease on its Dublin HQ. Meanwhile, Shane Fahy of McCann FitzGerald argues that when it comes to creating insurance policies to deal with future pandemic hazard, past responses to terrorism may provide a template.