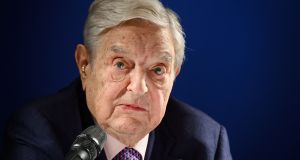 The EU should issue perpetual bonds to fund the €2 trillion needed to tackle the Covid-19 pandemic and climate change, according to financier George Soros.

Mr Soros described the threats as the “crises of my lifetime” which “endanger the survival of our civilisation”. These huge costs can only be covered, he said, if EU member states authorise the creation of “consols”.

Consols are perpetual bonds that have been used in Britain since 1751 and the United States since the 1870s.

These perpetual bonds are underwritten by member states either acting unanimously or as a “coalition of the willing”. The annual interest rates of 0.5 per cent that countries would pay on these bonds would be “peanuts”, according to Mr Soros.

In contrast, he said, doubling the EU’s budget – the proposal now under consideration – would provide only about €100 billion and yield only one-tenth of the benefit that consols could provide.

Mr Soros said the EU faces “several existential dangers” and that he “won’t give up hope” that these “exceptional measures” are implemented. He said they “should never be allowed to be issued in normal times but are ideal right now”.

So far, he said, the debate has been “poisoned” by a focus on “corona bonds”, which have been rejected by the European Council. He said this was “for good reason” as they “imply a mutualisation of accumulated debts”.

Mr Soros was speaking in an interview entitled The Crisis of a Lifetime with the journalist and author Gregor Peter Schmitz, published by Project Syndicate.

Mr Soros also expressed concern about the EU’s survival. He said it was an “incomplete union”, making it “exceptionally vulnerable”.

He pointed out that it is “based on the rule of law” but that “the wheels of justice move very slowly”, while threats such as Covid-19 “move very fast”.