Ryanair plans to restore 40% of flights from July 1st

Passengers to be asked to wear face masks, have temperature checks and no queueing for toilets on board 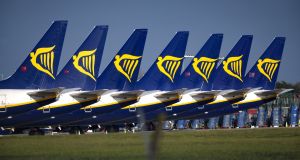 “Ryanair will operate a daily flight schedule of almost 1,000 flights, restoring 90% of its pre-Covid-19 route network”

Ryanair plans to restore 40 per cent of flight schedules from July 1st, including 139 routes from the Republic, the airline said on Tuesday.

The Irish carrier announced that flights on 90 per cent of its route network would be restored, with schedules returning to about 40 per cent of previous capacity.

This means fewer flights will be flown on routes than was the case before Covid-19 lockdowns.

The airline stressed that this was subject to governments lifting travel bans within the EU, and public health measures being put in place in airports.

“Ryanair will operate a daily flight schedule of almost 1,000 flights, restoring 90 per cent of its pre-Covid-19 route network,” the airline said.

The carrier hopes to operate 139 routes from the Republic’s airports, including 101 from Dublin, 23 from Cork and 15 from Shannon.

It will restore its usual services from the State, but with fewer frequencies, particularly on longer journeys.

Eddie Wilson, chief executive of Ryanair Designated Activity Company, declared that it was time to get Europe flying again after a four-month lockdown.

“Ryanair will work closely with public health authorities to ensure that these flights comply, where possible, with effective measures to limit the spread of Covid-19.”

The airline said that it would ask passengers to wear face masks, take temperature checks at airports, check in fewer bags and download boarding passes to smart phones.

Ryanair crew will wear face masks, while the airline will limit on-board service to pre-packed snacks.

There will be no queueing for toilets, with access available on request.

The carrier believes that airports should carry out temperature checks as passengers enter them. However, EU airports have yet to agree to take these steps.

Airlines are responsible for checking in and boarding passengers and their luggage but not the journey through the airport.

The Airports Council International, Europe (ACI Europe), followed Ryanair’s announcement by calling for a co-ordinated approach to sanitisation to allow travel to restart for the summer.

Director general Olivier Jankovec said this would involve “looking at the most effective combination of measures” across all means of transport.

Mr Wilson argued that new policies were needed to balance public health protections with the need to allow travel to restart. He pointed out that governments and the EU were aware that anything that could be done should be done.

“There is a lot of work going on in the European Commission at the moment to get a co-ordinated response to this,” he said.

Michael O’Leary, Ryanair group chief executive, earlier dismissed measures such as the British government’s proposed 14-day quarantine for those arriving in that country.

He argued that it was completely “non-science-based” when it exempted the Irish and French. “It’s nonsense and it has no effect in limiting the spread of Covid-19,” Mr O’Leary told ITV programme Good Morning Britain.

He added that the virus’s peak had passed, and that effective measures such as using masks and temperature checks for air travel were what was needed.

“They’re not going to involve measures that have no public support like lockdown, isolation,” Mr O’Leary said. “They’re utterly unimplementable anyway because you don’t have the police resources to go and check the people.”

Mr Wilson maintained that the proposed partial resumption of flights was the right step for the airline to take as European countries began to gradually ease restrictions. “You cannot launch flights on the 30th of June to fly on the 1st of July,” he said.

He pointed out that Ryanair already had some experience of operating with Covid-19 as it had been flying skeleton services between Dublin, London and other destinations.