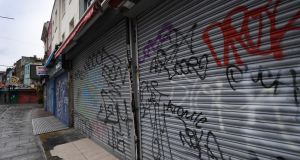 AIB has €6.6 billion of loans out to business sectors hit directly or highly exposed to Covid-19.

Much of the €210 million loan impairment provisions AIB took in the first quarter of the year was down to it taking a big picture view. This view involved the economic chaos caused by Covid-19, and the likelihood that many of the households and businesses availing of 50,000 payment breaks from the bank would not be in a great state when the temporary relief ends.

Luckily for the bank, while the Irish unemployment rate is currently running at 28 per cent – almost double the peak rate seen during the financial crisis – only 8 per cent of its mortgage borrowers have been forced so far to avail of payment moratoriums.

“I’m probably pleasantly surprised with the percentages,” group chief executive officer Donal Galvin said on a call with analysts on Tuesday, adding that a lot of the people at the coal face of job cuts were lower paid workers who didn’t have mortgages.

Meanwhile, 11 per cent of business borrowers are on payment breaks. AIB has €6.6 billion of loans out to business sectors hit directly or highly exposed to Covid-19, including hotels, bars, restaurants, motor dealers and distributors, non-food retail, travel, leisure and shopping centres.

The moratoriums in themselves have not yet affected how AIB categorises loans. The majority were deemed to be of good quality before the breaks and that remains the case. Indeed, with the payment pauses set to run to as far as the end of September, the bank could drag out recognising the likely problems. But Galvin said AIB would be working hard over the coming months to work out the real risky cases and start setting aside specific provisions against them.

The €210 million charge taken in the first quarter will be followed by a bigger one for the second, according to the bank. Analysts estimate provisions will remain elevated for the remainder of the year – though both they and the bank seem confident that AIB’s capital levels will remain strong throughout the crisis.

The Central Bank, meanwhile, will be expecting AIB and others to start engaging with at-risk borrowers over the summer to work on longer term forbearance or restructuring options so they don’t face a cliff-edge in September.

However, there was one portfolio of loans that AIB could not afford to delay taking provisions on during the first quarter: its €4.6 billion leverage loans business.

This is part of $1.4 trillion (€1.3 trillion) global market for loans to fund already heavily indebted companies with low credit ratings, or finance buyout deals. It’s a market that has doubled in size since 2007, turbocharged by the fact that such loans command relatively high interest rates in an otherwise low-yield environment.

However, the industry had drawn warnings from regulators globally in recent years amid fears that a cyclical turn in the economy could lead to a spike in defaults, destabilising the global financial system. Covid-19 is a black swan event that could see things turn ugly.

The exposure of AIB and Bank of Ireland to this market is relatively small by international standards and, by all accounts, their risk appetite is at the more cautious end of the scale.

But AIB’s move in the first quarter to take a €50 million loan impairment charge against its book as it moved €500 million of leverage loans into higher-risk category may just be the beginning.

1 If tourists are such pariahs should we not be testing them on arrival?
2 ‘My rent here is so low it’s a joke’
3 Varadkar and Donohoe to meet banks to discuss mortgage breaks
4 EU court to rule on the Apple state aid case
5 WeWork on track for profits in 2021, says chairman
6 Indoor vertical farming is the future says Irish agritech start-up
7 Over 2,000 march in Athenry in support of Apple data centre
8 Digicel warns of Covid-19 hit after first earnings rise in years
9 Brendan O’Driscoll and Aidan Sliney, Soundwave
10 Property outlook 2019: Interest to turn to secondary urban areas
Real news has value SUBSCRIBE