Georgieva warns prospects are ‘worse than our already pessimistic projection’ 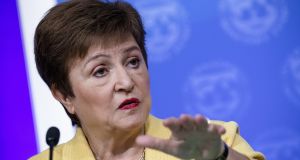 IMF managing director Kristalina Georgieva: “With the crisis still spreading, the outlook is worse than our already pessimistic projection.”

The global economic outlook has darkened further since the IMF forecast last month that it would suffer the worst blow since the 1930s as a result of the coronavirus crisis, according to its managing director Kristalina Georgieva.

The fund will next month publish downward revisions to its global economic forecasts, reflecting the fact that the virus had spread further and the economic impact had intensified in recent weeks, Ms Georgieva said on Tuesday.

In mid-April the IMF forecast a contraction of 3 per cent in global output, with emerging and developing economies contracting 1 per cent and advanced economies 6.1 per cent over the course of this year.

Speaking in an interview during the FT’s Global Boardroom online conference on Tuesday, she said: “With the crisis still spreading, the outlook is worse than our already pessimistic projection. Without medical solutions on a global scale, for many economies a more adverse development is likely.”

Ms Georgieva said the IMF’s previous forecast that emerging and developing countries would need $2.5 trillion (€2.3 trillion) of financial assistance to see them through the crisis would also be revised upwards.

“It is very important to concentrate on understanding clearly what protection measures we can offer to [emerging and developing] countries so that a liquidity problem does not become a solvency problem,” she said.

Countries had announced fiscal support measures adding up to $8.7 trillion since the onset of the crisis, Ms Georgieva said, adding that the IMF’s message to its members was, “please, spend as much as you can and then a little bit more”.

But, she added, the record capital outflows that emerging economies experienced in March had “seen a reversal” in April. This was thanks in part to liquidity injections by central banks including the US Federal Reserve, the European Central Bank, the Bank of England and the Bank of Japan, which had fuelled investors’ bond-buying. – Copyright The Financial Times Limited 2020