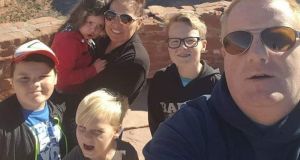 John Ryan with his wife, Denise, and their children on the Navajo reservation where Denise was born

An Irishman who is helping native Americans fight one of the worst coronavirus outbreaks in the US said these people live in “desolate conditions” and feel “forgotten”.

John Ryan, originally from Newmarket-on-Fergus in Co Clare, but who moved to Phoenix, Arizona almost 15 years ago, said he is helping the Navajo families by delivering goods and food to them.

“We go shopping for them... They [would] have to drive three or four hours to get to a consignment store. Instead, my brother-in-law and I would do the big consignment store shop and bring it back up,” Mr Ryan told The Irish Times.

They’re lacking resources like running water. They have to haul water

Mr Ryan, whose wife, Denise, grew up in the Navajo region, said he is helping out because he wants to aid his children’s family.

Mr Ryan added that the conditions in which the Navajo people live are saddening.

“It’s [the reservation] the size of Ireland. If you can imagine there are all these people that need help. They’re lacking resources like running water. They have to haul water, which means basically getting in a truck with their 50-gallon container,” he said.

It is also difficult to separate an ill person from the remainder of the family as they live in multi-generational households with up to 20 residents.

Irish people have offered huge support to the communities in the reservation and have donated hundreds of thousands of dollars to their Covid-19 relief fund on GoFundMe.

The list of donors to the GoFundMe page is dominated by Irish surnames, and many donors left comments to say they were giving in remembrance of Native American aid to Ireland during the Great Hunger.

In 1847, members of the Choctaw tribe raised $170 in famine relief for Ireland, a huge sum for a time when they had very little, as it came after they had been driven from their land.

Mr Ryan’s sister-in-law, Doreen McPaul, who is the attorney general of the Navajo Nation, told RTÉ’s Morning Ireland the Irish people’s generosity was “beyond amazing”.

Mr Ryan added: “When you look at the Choctaw donation, we always talk about Irish generosity and I think it has to come from somewhere. To just see that come almost full circle was amazing.

“It just shows the pure genuine heart of the Irish people. It fills us expats with joy to see that they’re not only thinking of themselves but thinking of others at the same time.”